This is an odd one for me.

I went down to Emerald City Comic Con in 2018, like I do pretty much every year. I love that con, and my friends know I go down there and one of them contacted me and said, “Hey, there’s an artist down there named Lucy Bellwood, and if you can find a copy of 100 Demon Dialogues I’d really like one.”

So I went looking and couldn’t find her; artist’s alley at ECCC is huge and people use different names than you might expect some of the time and it makes looking more difficult than you might think. I contact AJ and let her know I’d continue to try but that I wasn’t sure where Lucy was or if she was here and then realized I was standing right in front of her booth.

“Hi,” said me, “A friend of mine sent me to find a copy of 100 Demons Dialogues.” There were two left. I flipped through one and realized I was going to need my own copy. This book was something I was going to want to study.

See, there’s an old thing about creative people being kind of crazy. Digging deep to find any kind of art is hard; you end up delving into places inside yourself that are uncomfortable and slither about, and historically our culture has not considered mental and emotional health to be as important as, say, spiritual or physical health.

We’re changing that, thankfully – we consider depression to be a treatable disease, and we’re looking at a host of anxieties that artists of prior eras would recognize but not have been able to name. Our language improves and grows and, as we identify things in ourselves, we find them reflected in others and discover that we are not alone.

As the demons of mind are discovered, we are encouraged to fight them and look upon depression as a battleground, a killing field, another war in a series of them, but isn’t that just another example of the societal trap we’re all caught in?

Can’t there be another way to deal with the demons that haunt us?

Lucy Bellwood has some intriguing ideas on the subject and tackles them in 100 Demon Dialogues, a series of one-panel comics wherein she talks directly with the demon that haunts her. The two of them argue, they fight and converse, and it becomes apparent that the demon is looking out for her in its own way. It’s scared and thinks she should be, too – it pushes her, prods her, wants her to obey its whims and misunderstanding of what she wants to do.

By talking to it, she finds a way to make a sort of peace with it. By jotting down those conversations in a series of quick dialogues, she shows both the demon and herself that they are not alone, and expands the language we can use to talk about the artistic drive, about depression, about love and fear and death. It’s powerful simple stuff with an adorable demon that’s been turned into a stuffed animal.

Lucy herself is also a pretty great human being, as you’ll be able to learn for yourself by clicking here. You can also find a list of places she’s planning to be by clicking here, or support her on Patreon by clicking here. She’s on a host of mediums, including Instagram, FaceBook, tumblr, twitter, soundcloud, and Vimeo. Check her out, buy her book, grab a stuffy, and find a way to build a better relationship with the demons that haunt you. 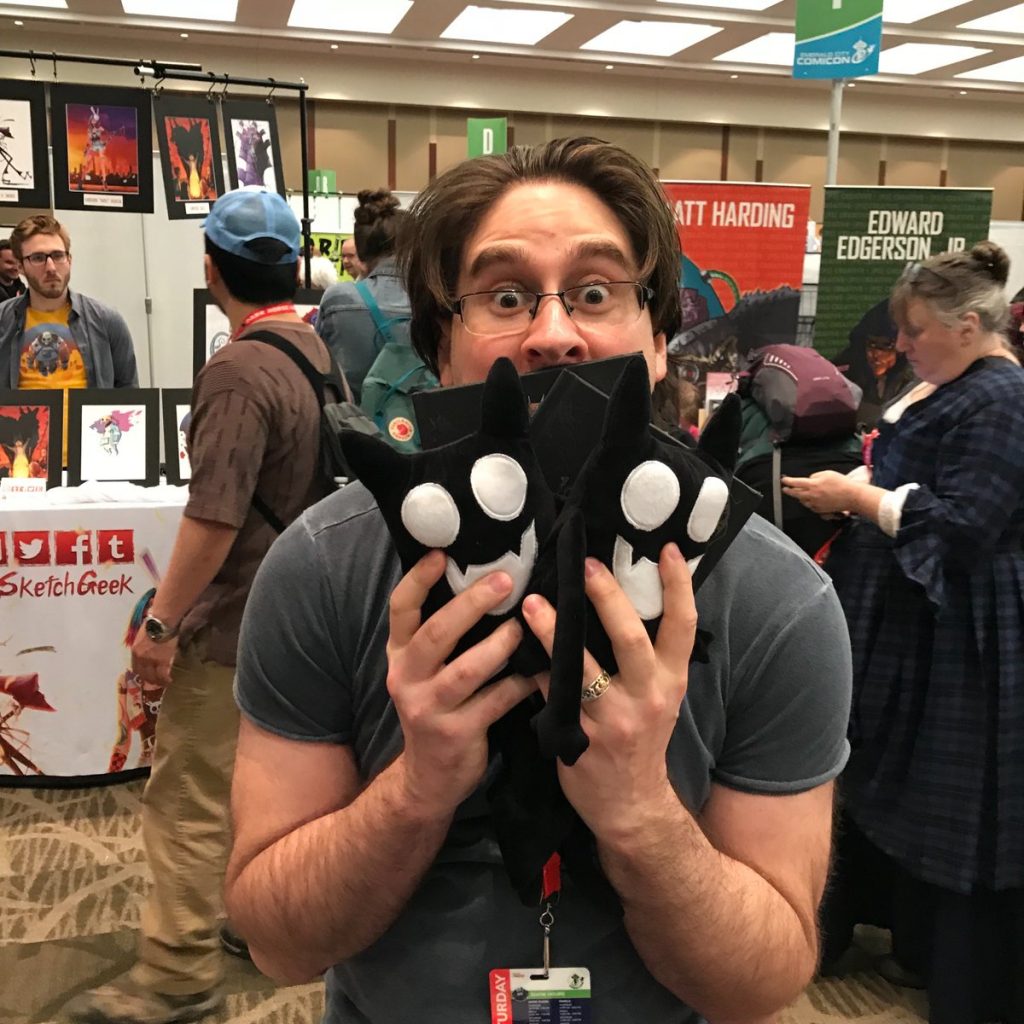