Evolving Television – Yes Plot, No Plot, Where Plot?, There Plot! 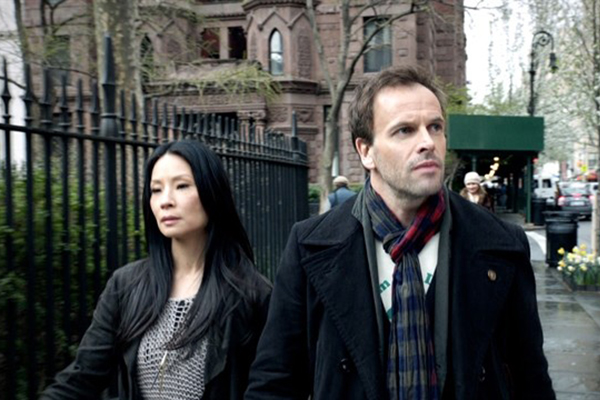 Elementary is one of those shows that polarizes people. It had the unfortunate timing to come out after BBC’s Sherlock, which got this whole Benedict Cumberbatch thing started by being, well, incredible. Sherlock translated Sherlock Holmes into the modern world in a believable way, with interesting characters and cases, and had one of the strongest first seasons of any television program in history.

CBS’ Elementary seems an echo of Sherlock, what with also placing Sherlock Holmes in a modern setting, but everywhere Sherlock zigs, Elementary zags. There’s similarities between the two that harken back to the source material, but Elementary went out of its way to establish that their Sherlock was a very different sort of character, and the show works because of it.

Those able to get past Elementary‘s biggest flaw – that of having the audacity to be a Sherlock Homes story set in the modern day without, you know, being Sherlock – were able to see the show as a rather charming monster-of-the-week serial with several underlying themes that tied the first season into a larger arc.

Joan Watson, played by the excellent Lucy Liu, becomes a sober companion to a perfectly erratic performance of Sherlock by Johnny Lee Miller. The Sherlock of Elementary is a recovering heroin addict and Joan is there to keep him from slipping back into old addictions after quitting her medical practice for reasons of her own. The two of them play well off one another, learning to respect one another and work together. You can see why the two of them are friends, and the necessity of them being together provides dueling underlying tensions – what caused Holmes to become a heroin addict? Will he go back? What caused Joan to abandon her life? Can she go back?

We find out quickly that there was a woman named Irene who was killed by someone named Moriarty. Holmes has no idea who Moriarty is, but his obsession with finding this person and exacting revenge drives much of the second third of the season, interlacing with the dangers of addiction and Joan’s quest to keep Holmes from slipping back while, through him, she comes to terms with her own past and makes some serious decisions about her life.

All this comes to a head at the end of the season, where all the subtle cues built into the entirety of the show come to a head, and Holmes discovers that Irene is alive. Following this, he discovers the identity of Moriarty, and it very nearly destroys him. It’s good plotting, with excellent performances from all involved, and the whole of it makes sense and feels well paced. It makes for entertaining television.

The second season? Not so much.

We’re introduced to Sherlock’s older deadbeat brother, Mycroft. A series of subplots go nowhere and are seemingly unconnected but run rampant throughout the background of the monster-of-the-week episodes that make up the bulk of the season. We get only a single throwback to the previous season, and a background story that goes nowhere and has no actual resolution while also undermining what makes the show work.

It was not good.

Yes, it appears to follow the narrative track laid out by the first season, but fails in execution. Without a definite endgame as a finale and no payoff to any of the groundwork – hell, a lack of solid groundwork to keep following – the season floundered. Why was Mycroft there? What purpose did he serve? Who was he working for? You had a season to tell us these things, series, and you gave us nothing. Or, at least, anything that made any sense at all.

The third season started back in November, and is still building itself nicely. It seems to be following the arc of the first season more that the second, what with introducing a new dynamic between Watson and Holmes while also giving them a third character to play off of. This character has become a new means of understanding and evolving every relationship in the show, and is an interesting addition to the series in her own right.

As of last episode, we have reason to believe that she is going to be the fulcrum of this season, sort of like the threat of heroin was in the first – a gateway to something much larger and more interesting.

The question is – why are we still watching? The subtleties of the first season’s narrative, the excellent performances, and differences from Sherlockwere enough to keep us going, but the lack of any real resolution, point, or consequence in the second season were enough to turn us away.

Modern audiences are beginning to turn away from monster-of-the-week serials in favor of binge-watching or series built around that concept, a practice I heartily endorse given the stronger stories that have emerged from the trend. The over-reliance of monster-of-the-week episodes can now derail a series entirely, driving people in search of better or more balanced programming.

Take a look at, say, How to Get Away With Murder (and we will be next week). That show is also built around the monster-of-the-week formula, but has two other narratives running through each episode – the second focusing on a given character, and the third focusing on a murder that those characters are all involved in. It makes for rich drama alongside a brilliant character study, and the subtleties of each script do far more than Elementary manages over a longer period.

All of which means this: Elementary is a good-to-great show that could be much better with just a minor shift in focus – a stronger degree of complexity that doesn’t hide the more interesting plots behind what’s happening this week, excepting where what happens on a weekly basis ties into the greater narrative. We need more of something that ties the show into a greater whole, and less of anything that allows us to skip a week here or a few episodes there without fear of missing something important.

If you’re going to have a mystery show, everything shown on screen should matter – even red herrings require some sort of denouement, and strong performances cannot carry a series that has no ongoing structure in this strange modern era. The nature of the television serial has changed, becoming more complex and resulting in much better stories being told. While Elementary would have been lauded as brilliant even six years ago, that environment no longer exists – and the writers of Elementary need to realize it to keep a show that deserves to keep going, going.

Filed Under: Articles
Tags: ELEMENTARY, REVIEW, TELEVISION
Why Aren’t you Watching This? Constantine
Mindful Trashy Television – How To Get Away With Murder