Fifty Shades of Do Not Want 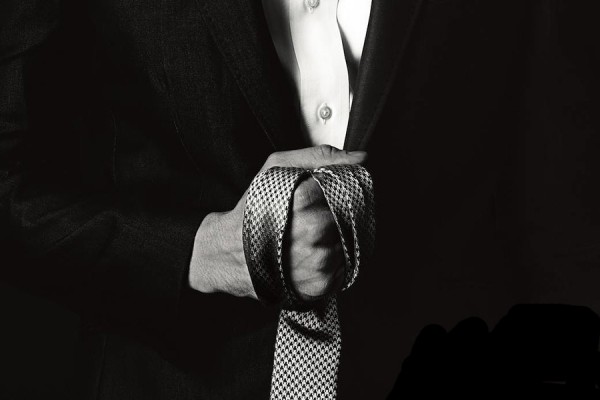 Fifty Shades of Grey is a textbook for abuse. It terrifies me that people are going to read this book or see this movie and think that this is an okay way to act, that any of the things that Christian Grey does are even the slightest shade of okay. They aren’t. As a fantasy, it’s alright – but this isn’t being portrayed as fantasy, it’s being portrayed as a blueprint and a relationship to aspire to.

This is a problem, for many reasons, one of them being that Fifty Shades of Grey is going to introduce kink to the mainstream. This is not to say that other movies haven’t involved kink in some way, but Fifty Shades sells itself on the virtue of kink while only having the dressing and none of the depth. It is style pretending at the substance of kink, while really being about abuse. Again, that terrifies me – because a lot of people are going to equate Fifty Shades of Greywith what a healthy kinky relationship looks like, when it is anything but.

We’re not against kink. Or sex, for that matter. We welcome a greater degree of acceptance in the mainstream when it comes to both things, because open and frank discussions about sex and sexuality are important – if we’re going to base so much of our identities on these things, then we need to respectfully acknowledge these very human qualities. And, hey, people have kinks. There’s nothing wrong with that, and it’s nothing to be ashamed about. The stuff that you fantasize about or do with other consenting adults…go nuts. Celebrate it and wave your freak flag. Experiment a little and have fun with it. Sex and kink can be all sorts of great.

Please, for the love of whatever God you prefer, do not use Fifty Shades of Grey as a model for that exploration. 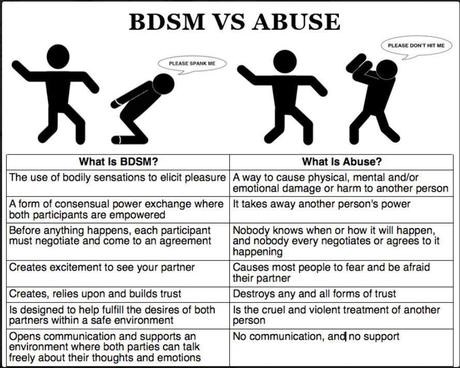 This story claims to explore BDSM. For those that don’t know, that stands for Bondage / Domination / Sadism / Masochism. There’s a whole culture that’s grown up around those concepts as they apply to a series of sexual games that are played between people in a consenting and safe way. People in that community have a great deal of etiquette and respect for consent and agency, because they do recognize that the game they play is easy to get lost in. For example, there’s a thing called a ‘safeword,’ a pre-arranged phrase that, when used, ends the game. Period. This is necessary in a game where the word ‘no’ can be a part of play, and there needs to be a way to stop that lacks any sort of gray area or shade of misunderstanding.

Fifty Shades of Grey is abuse disguised as romance, a horror story culled from Twilight Fan Fiction. Twilight was already abusive enough, staring a stalker who creeps around a girl that he looks upon as a drug. Fifty Shades takes things to an illogical extreme by making its romantic lead a possessive and broken dude-bro stalking and then controlling a sexually inexperienced girl, isolating her from her friends and family, making decisions for her without informing her of those decisions until after he’s made them, and hurting her without any regard for her health, well-being, or agency.

This story glorifies rape and then tries to sell you on the idea that rape is okay. Rape is not okay. Rape is never okay. When someone says ‘no’ or ‘stop,’ that’s it. The other person stops and then makes sure the other person is okay. When Christian Grey hears his sexually inexperienced partner say ‘no’ and continues anyway, that’s rape. When she uses safewords and he ignores her, that’s rape. When he breaks into her home, when he steals and sells her car, when he takes her away from her friends and family, when he dictates what she can eat and what she can wear and who she can talk to, that’s a violation of her ability to be a person.

That never happens in Fifty Shades of Grey. The female lead, Ana, is left in tears and is isolated from her support structure – her friends and family – to a degree that can only be called insane. When Ana wants to go visit her family without getting Christian’s permission first, he literally grabs her and drags her away, telling her that she’s his property.

People aren’t property. Not ever.

People are not toys that you play with and put on a shelf when you’re done. 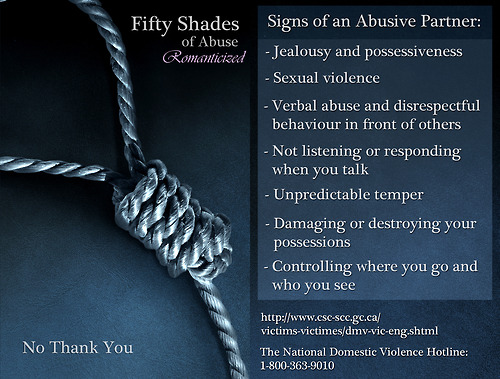 Nothing that happens in this story is Ana’s fault, but she thinks it is. In the book she consistently blames herself for Christian’s misbehavior, wondering what she can do to fix him. People – women and men both – you cannot fix the person that is hurting you. They have to want to be fixed. If they abuse you and know they can get away with it, they will continue to do it. This does not make it your fault. Get away.

I know it’s easier said than done. I know no one gets into a relationship thinking that it is or will be abusive. Abuse tends to happen slowly, a bit at a time. It robs you of agency, certainty, and identity by stripping you of confidence and making you reliant on your abuser. Walking away from your abuser can seem impossible, because an abuser can make themselves seem like the only certain thing you have left. There’s help if you need it. You are not alone.

Filed Under: Articles
Tags: 50 SHADES OF GREY, BOOKS, REVIEW
How I Learned to Stop Worrying and Love the Blacklist
Vikings – Raiding History