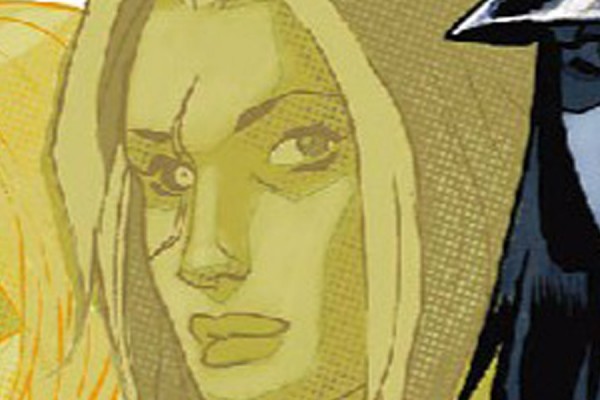 WE ARE LIVING MYTH MAGAZINE, AND WE ARE HERE TO READ COMIC BOOKS! EVERY WEEK, WE GO AND FEED OUR ADDICTION (SINGLE ISSUES MOSTLY ONLINE, TRADES MOSTLY FROM CONVENTIONS OR  BIG PETE’S). THEN EVERY WEDNESDAY WE RESPECT WODEN, THE GOD OF COMICS, AND WE SPEAK OF THE STORIES THAT HE, IN HIS GREATNESS, HAS BROUGHT US. WE SPEAK OF IT ON TWITTER.

And we’ve sort of evolved. We’ve got Nerdcouver to do straight-on reviews now, and they’re a cool collection of kids that know their stuff. And, let’s face it, there’s plenty of reviewers out there. We’d like to bring a little something more to the table. And so…

We’re going to pick one of our Top 5 Comics, or maybe one of the honorable mentions every week, and then we’re going to talk about them in-dcpth. What makes them work. Why we like this comic, and why we think you should read it. We’re gonna cover themes, character, story, art, all the stuff that makes comics so freaking great. We’re going to tell you which run of comics, specifically, we’re talking about. And then, to top it all off, we’re going to link you to places you can grab those comics if you can’t just make the run to Big Pete’s.

So, this is the new norm. This is what we’re going to offer, going forward. We’d like to know your thoughts.

The Coffin Witch is watching you.

There’s a rather good book called Wise Man’s Fear. In it, a musician plays an incredibly difficult piece of music while acting as though it’s nothing particularly taxing, then plays a very simple piece of music as if it were an impossible accomplishment. It’s a performance on multiple levels – those that appreciate music can listen to the tune and enjoy it just for that, but any other musician is going to look at this and know exactly the sort of skill they’re getting to witness.

I’m a writer. I’ve got a novel over here, and a bunch of others that’re raring to go. And I do this whole thing about qualitative storytelling, and enjoying good stories, and looking at why some stories work and some don’t. It’s one of the reasons we do a weekly top five comics over on twitter, so that we can spread the word on comics you might otherwise miss.

With all that in mind, we need to point out exactly what Caitlin Kittridge has done with Coffin Hill.

On the surface, this is a very simple story. An evil witch is burned at the stake, then uses magic to haunt the town that burned her through a bloodline curse. It’s nothing we haven’t see before – Hocus Pocus did this as a comedy, for example – but it’s the way in which this story is told.

We start with Eve Coffin, the latest of the descendants that have come to be known as the Coffin Witches, but we don’t join her at any particular point in her life. No, that would be too easy. Instead, we join her at three points in her life, drawing parallel narratives between her as a teenager, as a cop, and as a burn out.

The writing is good enough to give each narrative thread a unique feel, from the rebelliousness of youth to the hope of escape that comes with being a cop to the sense of crippling despair that follows that inability to escape. The art follows the writing, investing a manic energy into the first threat, a staid hyper-reality in the second, and a sense of resignation in the last. It’s in every line, the body language and inks that are used from one panel to the next, except when we need one thread to bleed into another or something otherwordly happens.

And otherworldly stuff does happen. Eve doesn’t know what she’s getting into when she’s young, and her dabbling ends up costing her so badly that she flees her home and goes to become a cop. Think about that for a moment; this is a young woman who is so badly frightened that police work in a slum, facing drug dealers and serial killers, seems like a safe alternative. And as we come to understand what happened to her, we agree with her decision.

She thinks if she can trap herself in the mire of the worst normality has to offer, she’ll somehow escape the curse she was born into. She can’t, of course – she’s drawn into a serial killer investigation that needs her to succeed, because the killer they’re hunting is something of a witch, too. She needs to draw on the power she’s forsaken not just to catch the murderer she’s hunting, but to survive the attention that is drawn to her because of it.

We know she catches the killer, and we know the cost. We can see it in her face in the future, the irrepairable damage that is caused by running away from your problems. She’s drawn back home, where she has to face the consequences of her actions, and finds that they’ve only grown worse in her absence.

Running away solves nothing, not really. Whatever you’re running from is either going to catch you when you’re finally exhausted, or grow more powerful without you there to stop it.

This is only the first arc.

It’s maddening, how complex and how well this story is told. Snippets of information revealed in one thread of time that give weight to the others, going both forward and back. We can see where hubris and disbelief leads to, and we can see what it takes to refind faith not in magic, but in self. It’s some of the best writing you’re going to find in a horror comic, and, yes, this ishorrifying.

There’s a sense of dread that hovers around every character in this book, regardless of when they are. Terrible things lurk just out of sight, and it’s hard to tell who has it worse – the people that almost know what’s going on or the ones that are entirely ignorant. There’s no escaping what’s just out of sight in any event, so the question is would you rather not really understand what’s coming for you or live, unaware, until whatever is coming, comes. Both options are terrible, but they’re the only ones available.

We get inversions of common horror tropes, examinations of escapism and empty faith and the cost of belief. We look at love in all its permuations, as friends and family and lovers, and we see how love can be corrupted and used as a weapon, but also how it can heal and make people stronger. There’s balance here. Everything feels real, regardless of how insane the events might be.

As the story goes on it becomes more complex, again and again and again. We delve into more points of when, following the childhood of Eve’s estranged mother and coming to understand why she’s become so aloof and crippled and the distance that separates the two of them. We see what the original Coffin Witch did to kick this whole thing off, and the terrible vengeance she’s enacted on the town that bears her name, the town she cursed before she died.

It’s an incredible piece of work, and here’s the trick: it looks simple. The way it flows from one point in time to the next, the way the story handles revelation and character building is so easy to follow that you could swear you’re reading a child’s primer. There’s no hesitation, no confusion about who you’re following or when you’re following them even as the story spirals ever deeper into history and characterization.

Think about that for a moment. Think about how much time and thought had to go into building the structure of this narrative, to measure out information and when to dole it out for the most possible punch. It’s heady and thought-provoking and a goddamn masterpiece, but it’s so easy to follow that you don’t even notice how complex it is until you take the time to think about it.

If you’re just looking for a good horror story, you can read this and put it down and be done with it. It’ll give you the chills you’re seeking, give you engaging characters and that slow creeping fear that the best horror stories craft and the worst try to replace with jump scares. It’ll come across as really good, great campfire material maybe, a story on par with the old Clive Barker or John Carpenter movies. Hellraiser. Prince of Darkness. That sort of thing.

On the other hand, if you are Clive Barker or John Carpenter, you can enjoy Coffin Hill on an entirely different level. You can look at this story and pull it apart, take a look at what was done where and understand why. You can appreciate this tale the same way you might appreciate a gourmet meal, something crafted together with care and thought and diligence. You can internalize the why this story is told and apply some of the devices to your own writing, and become a better writer for it.

And the artwork…! This is a comic carved from shadows. I remember hearing about a cartoon where the artwork started with black backgrounds, and added color. That’s what this artwork feels like: Inaki Miranda and Eva de la Cruz started with absolute darkness and added the bare minimum of color needed to drive everything forward.

This gives the impression of light being terrified of what’s happening in these pages. This isn’t to say that the artwork is dark or hard to follow. It isn’t. It’s lush and vibrant, almost a rebellion against the terror writ large on every page. It’s just as complex as the writing demands it to be, and it’s a large part of why this comic is as powerful as it is.

In brief? This is one of the best horror comics of the modern era, a complex look at the cost of bloodline curse and the horrors that come with it, framed by gorgeous artwork that does everything that it can to enhance the power of the narrative.

Coffin Hill is as enchanting and haunting as the best grim faerie stories, and we can’t recommend it enough.