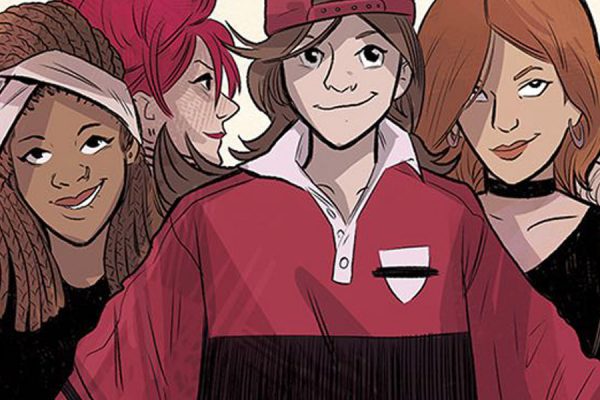 This comic makes me impossibly happy.

Do you understand the weird lives of late-eighties and nineties kids? Caught between ever-increasing technologies? We were born to 8-tracks and were there when cassettes gave way to compact discs gave way to burned discs and finally digital music. We were around to watch the face of music change from one medium to another and the weird liminal spaces where that changed and some of us worked.

Have you seen Empire Records? We all worked at places like that, or knew someone who did, or wanted to. I was lucky enough to work at two places where that sort of magic held sway until one of them was demolished to make condos and the other one sat empty until the whole lot was torn down. There’s something both glorious and sad about that change, though the better comic stores still have that same feel.

Save the Empire. Damn the man!

Hi-Fi Fight Club is very much a story that takes place in that strange world, that space and cool job that existed halfway between a fading summer and an unknowable dream. It’s a space for people to find themselves and to grow and change, a place where mettle is tested and personhood is achieved through the love of music.

A young girl named Chris gets a job working at a place called Vinyl Mayhem, and they’re all about music new and old, a space for people to find new tunes and appreciate what was. There’s no dragging people down here, just recognizing that different people have different tastes and Lauryn Hill is the fucking bomb, yo.

Jobs like this – when they’re in the right place, the small out of the way specialty stores that employ the right kind of people – have a way of breeding the best kinds of creative madness. The people that work here are always working on something else. They have passion and dreams and are building new incredible things and sometimes professionals drop by and offer their sage advice.

The professionals in this comic are the band Stegosaur, but we have a problem in that their lead singer is missing. By the time we get to this point in the comic, we know the people who work at Vinyl Mayhem and we know how they’re going to take this, what with all those bands going missing. They’re going to girl the hell up and save the day, and whatever else might happen this is going to be great.

Film and TV director Carly Usdin (she directed all six episodes of the television series Threads, which you should hunt down and watch and the oddly heartwarming black comedy movie Suicide Kale) handles writing duties and captures a sense of coming-of-age and identity seeking from that time and place with a perfect grace. Nina Vakueua handles pencils and fashion, teaming with Irene Flores with her light inks and Rebecca Nalty and her stunning color work.

It all adds up to something that’s part Empire Records by way of what Sailor Moon might’ve been, which I think says a lot given the influence and acclaim those two stories have had in the world. Don’t miss this. It’s totally fucking rad.