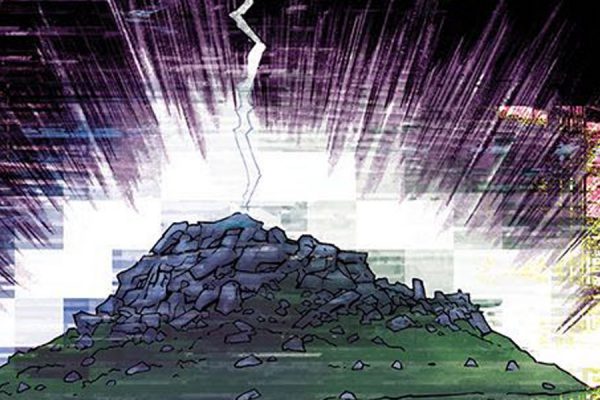 As Warren Ellis settles into the third arc of Injection it becomes increasingly apparent that he’s going somewhere with this. I should have known this, but I had forgotten – Warren doesn’t do ongoing comics that drift off into whimpering messes, he does pointed stories. His pen is a weapon that he has sharpened to a razor’s edge and he used it with the deft skill of a master swordsman.

Injection won’t go on forever. It’ll go on long enough for us fully explore the world presented and the characters that inadvertently created as they struggle against the ever-increasing stakes of the intelligence they created to make the world more interesting.

For those of you that aren’t in on this already, Injection is a comic about a think tank called the Cross-Culture Contamination Unit that was put together years before – a group consisting of some of the most unique minds on the planet that were asked to come up with a response to a plateauing progress of humanity that some other thinkers were worried would come and keep humanity from moving culturally. The think tank included a sociologist (she’s a physicist – ed.), a hacker, a spy, a detective, and a reluctant Scottish wizard, and the lot of them created an artificial intelligence and the wizard gave it the power to alter physical reality.

They let this thing into the world and it has been a mess ever since. We were introduced to the sociologist in the first arc, the one that put the team together and is borderline insane due to the consequences of her actions. The second arc followed the detective trying to outwit the machine he helped create as lives ended all around him. Now we’re dealing with ancient signals playing havoc with modern computer signals, so the hacker has been called in to collect.

That means the spymaster and the wizard are left, and there are no guarantees that either of them or any of them will make it to whatever the endgame is here. The only thing we know for certain is Warren is going to take us on a hell of a ride and we’ll never see the final destination until we get there, breathless from the mad journey.

Warren is working with Declan Shalvey and Jordie Bellaire, which means the whole book is work of art – between the lines, shading, and coloring, this book is a true work of art. It’s stunning, every panel, every page.

This comic is Lovecraftian sci-fi, and the whole creative team is pouring their very best work into it. The result is something that feels magical and disquieting, a ritual that seeps through your skin and into your soul at $3.99 a pop. Take my word for it and take the Injection – it’ll make your life much more interesting.