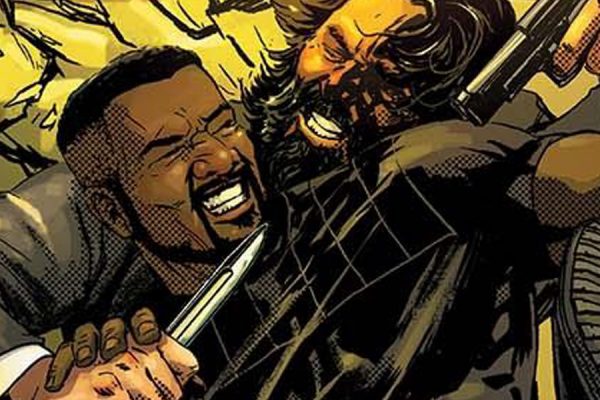 We like to say that Warren Ellis is the best writer in comic today.

Yes, he has his tropes and fallback techniques, the most egregious of which is writing interesting characters and complex stories. This is the guy what wrote Transmetropolitan, Next Wave, and Injection.Supreme: Blue Rose. Moon Knight. Everything he touches is impossible to put down or set aside.

Hell, that Castlevania series Netflix is touting? That four episode parade of pure horrific bliss? That’s him. He did that. Wrote and produced it. The man knows what he’s doing. In Ellis we trust.

And we’re not the only ones: Jim Lee and DC Comics have entrusted the whole of the Wildstorm universe to Ellis. They’ve given him the keys to the kingdom and let him go with one of the more expansive universes that nineties Image Comics produced – Deathblow, Wild C.A.T.s, Stormwatch, DV8, Gen13, the whole thing is currently in the hands of this one man. They’ve given him leave to remake that whole universe in what looks like a maxi-series, following a format that feels like more like Watchman than you’d expect. It’s got that scope, that depth, that sense of finality.

A friend of mine once told me that large comic stories happen in either four issues, twelve issues, or twenty-four issues (52 notwithstanding). Ellis is doing that last one, and traditionally this sort of story will be broken down into acts – and this issue is the end of the first act. Whatever spills out of this issue is going to leave us breathless and in need of an extra month just to take it all in, so this is it: the last fix we get until September.

In it, the world’s deadliest assassin is having some problems. Professionally, people call him Deathblow, but his friends call him Michael Cray, and he just turned down a target on an innocent person and aspiring dictator-behind-the-scenes Miles Craven can’t let that sort of thing go. Their conflict comes to a head here.

Meanwhile, Angela Spica saved tech genius and CEO James Marlowe from getting killed by Cray a few issues back, and in the process, we learned that there’s some technology lurking in her that various powers in the world would like to take from her. James is interested in protecting her and has sent out Cole Cash – the Grifter – to rescue her, but she’s more likely to befriend the woman some call Void.

Conspiracies abound, secret powers and players moving throughout the world, and none of them like being exposed in the way Angela has made people realize that there is more going on all around them. Treaties have been breached, secrets are being revealed, and a war spilling from shadows to light looks inevitable.

Warren Ellis is joined by artist Jon-Davis Hunt, working a style of clean lines and gravity, while colorist Steve Buccellato works a surprising sense of light into a story about shadows. This comic is one of the best things you can have your mind devour, so what are you waiting for?