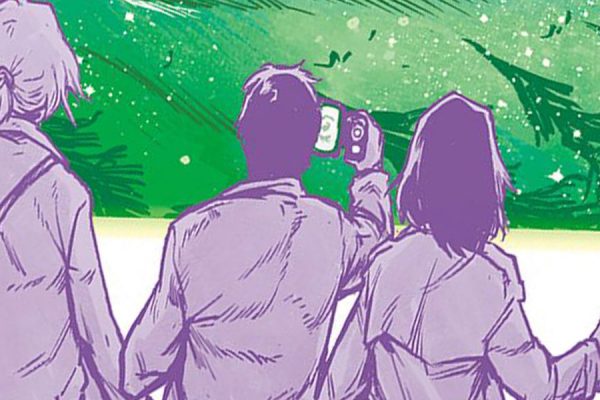 It’s funny. This comic started at about the same time I started doing God of Comics, I think. It’s been a journey – a good one, a tragic one, a path that has let those who walked it be and do many things. Secrets were revealed, possibilities explored. And now – like all the best stories – it’s coming to an end.

We’ve talked before about how good this series is. We’ve done individual issues and the series as a whole, done podcasts, articles, even live events where we’ve spoken about how cool the Woods is and why you should read it.

So, one more time: the Woods is the creation of writer James Tynion IV and artist Michael Dialynas. It’s about a high school in the middle of the American wasteland being transported to some place other, a fantastic alien landscape that they have tried to navigate. The kids quickly realized that the adults in their lives did not hold the answers and that if they were to find salvation they were going to have to do it themselves.

Which is not to say that this has been easy. People have died. One of the faculty tried to enforce martial law. One of the students made deals with nations he didn’t understand and learned how small he was and how vicious he wasn’t. A genius learned the limits of his intelligence and the price of loneliness.

And one person – one single child – fought to do right by everyone, driven by guilt and fear and eventually by understanding. She’s become the hero of this piece in a way no one would have thought possible in the beginning, but the real trick for her will be going home. How does one walk out of the woods when one has been changed by them so dramatically?

The answer is a simple one: not alone.

If you look at any single issue of this comic you can see the groundwork for everything that came after it, every bit of writing James Tynion has done since. It’s emotional gut-punch after emotional gut-punch, but it also realizes that nothing ever ends. We get glimpses of story, glimpses of people – aftermath is sometimes not the end and cannot be, because what could possibly follow what came before the moment of release?

There’s no aftercare here. There is only an ending, and it is enough.

Michael Dialynas’ art was superb, a collection of weirdness that felt cohesive and ran on a logic that could be grasped if one took the time to notice all the small details. And they are worth noticing, the nuance of expression and direction of eyes, the subtle cues of body language for characters and shading in the world around them. He brought this story and everyone in it to life, gave us an entire world that was like nothing any of us could have ever expected.

Bravo, both of you. Every single issue has been a genuine pleasure.