The comics industry was in a weird place in the mid-eighties. The sixties and seventies were in the past, a decade on politics and a decade of self giving way to a decade of greed. The children of those two decades had come of age, the hippies of yore becoming the yuppies of that moment. Weed was replaced with cocaine, faith and hope with cynicism and avarice. This was the decade where people sold their ideals for whatever was available at market value and it led directly to the world we now live in.

But those children had come of age and went looking for work. The kids that had grown up with the creativity that defined sixties comics and the experimentation that made seventies comics wanted to make their own mark. We started seeing comics that ignored the Comics Code Authority, saw the rise of comic stores that would carry things that newsstands wouldn’t.

Marvel experimented with some heavy crime comics, letting Frank Miller pen the classic Daredevil run that has since defined the character. DC Comics had him do the same thing with the Dark Knight Returns, but they had also contacted a much stronger writer for a much more involved project.

Alan Moore came to be in Thatcher-era politics in Europe. Canadians had Trudeau senior and he was alright, but America had Nixon and then Reagan, and between the two of them they poisoned the American Dream until it died in late 2016.

With all that in mind, it needs to be said: Margaret Thatcher was worse.

Maggie Thatcher was the sort of person Ayn Rand and Paul Ryan wish they were, the sociopathic demagogue devoted only to herself and nothing else. A nihilistic solipsist willing to twist the faith of others into a perversion of itself. She literally stole food from children, literally wanted concentration camps for gay people. She was a horror who attacked artists, scientists, anyone and anything that did not toe her line.

This is Alan Moore: 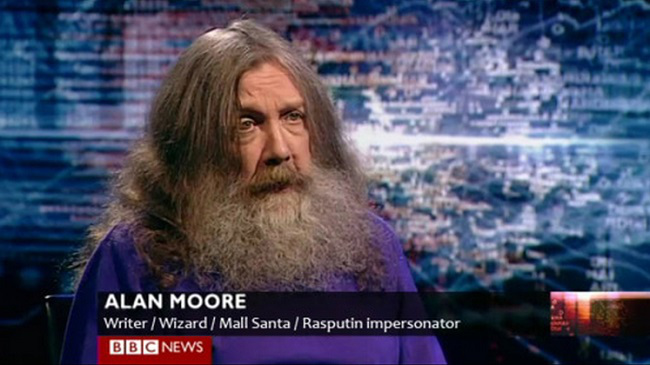 Does that look like the sort of person who cares about the line? At all?

There are stories that Alan Moore was poisoned. Shot. Left for dead. There are tales that whisper about how he’s some sort of immortal come from the woods and shadowed places. There are legends that he worships a snake god that created the universe, a snake god that he invented.

All we know for certain is this: Alan Moore is one of the greatest writers who has ever lived, and Watchmen was just one of the masterpieces that he has penned.

He wasn’t alone in this. Artist Dave Gibbons perfected a claustrophobic art style based in moody shadows and odd color choices that built up a sense of dread. Dave managed to inflict a sense of entropy even on the fantastic, weaving awe with degradation on the same page, often the same panel. It’s a stunning achievement, one that other artists tried and failed to copy.

In so many ways Watchmen stands apart.

Watchmen was billed as a twelve-issue maxi-series, a closed loop that would take a year to tell. You’d get single page spreads in other comics that would introduce a character and a quote and promise a story like nothing else that anyone had ever seen in the medium before. This is one of the few times that promise has been lived up to and surpassed.

This is a story of the world on the brink of nuclear war, the result of real-politick carried out in extremis. Men and women put on costumes and went out to fight crime with mixed results, and that has not calmed things down at all: Alan Moore took a look at the impact costumed heroes would have on the world and the impact facing the worst parts of humanity would have on those heroes. No one is alright. Everyone is broken and the world is broken with them.

Our heroes spend twelve issues investigating a murder and trying to stop someone from bringing peace to the world. The smartest and kindest man in the world is going to kill twenty-five million people to make sure the world doesn’t end in a nuclear holocaust brought about the sycophantic politics, the stupidity of the military-industrial complex, and greed-driven stupidity.

It’s not just the best comic ever written – it’s one of the deepest and most complex stories ever put to paper.

And it’s a comic.

Of course, it is. Watchmen, by design, could not be told in any other way – the movie is nothing but a companion piece that just highlighted the impossibility of that transition. Watchmen, with it’s passing through time, asides that only make sense when they tie into the climax, and divergent world-building, could only work as a comic. There are other tales in the medium before that could be argued as art, but Watchmen was indisputable proof that comics were a valid medium of storytelling, capable of the maturity seen in other mediums (books, movies, radio plays) and deserving of the same respect.

The thing is, Alan wanted to distance himself from older comics while also paying homage to them. The latter comes from his heroes being stand-ins for the Justice Society. The distance comes from the terrible dark nihilism that drips off every page. Watchmen is dark, an oozing grimness permeating every page. This story and the world in it are consumed by a terrible sense of entropy that works with the story and highlights the characters and their struggles.

And this is where the problem comes from: we’ve spoken before about how people sometimes mistake style for substance, or think that a story works because of how it looks more than what it does or the tale it tells. People read Watchmen and decided that they could echo the success of that story by embracing the nihilism in it, without understanding either that nihilism or why it worked for that story. As good as Watchmen is, it led to a series of copycats that don’t fucking get it and result in shitty comics.

For example, the people behind the nu52 decided that people wanted grim stories based on the success of Watchmen and stories like it, specifically the success of Nolan’s Batman trilogy. They applied a universal brush of darkness to their world, not understanding that dark Batman stories work because of who and what Batman is, and that Batman acts as a counterbalance to the light that is the rest of the DCU.

More recently, that grimness was used to justify turning Captain America into a Nazi over at Marvel. “People like dark grim shit,” say the editors, wiping the cocaine from their nostrils. “Look at the success of Watchmen.” They dream of publishing the next Watchmen and mistake stunt-writing and needless shock as being the reason Watchmen worked when all their mistakes lead to is exhaustion.

One has to believe that Alan Moore is sick of it all.

DC Comics has tried to capitalize on the property ever since its inception and have managed to piss off Alan Moore in the process. Is this the picture of a man you want mad at you? 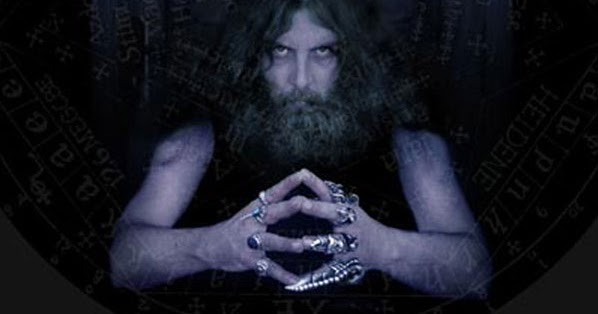 See, back when Alan Moore first wrote Watchmen, comics were denigrated pretty heavily and comics as a whole had a limited shelf-life. He agreed to a deal where DC would print a certain number of copies over a certain number of years and then the rights would revert to him and Dave. Instead, the popularity of Watchmen has allowed DC Comics to keep printing new copies long past the date of their deal, and through some legal fuckery, they’ve managed to keep the rights.

Alan has some very strong opinions on the matter.

DC, of course, decided to open up that closed loop: they started by adding some Before Watchmen comics that were passable at best and flew in the face of the established story at worst and were, as a whole, insulting to the reader and the man that got the ball rolling… though perhaps not as insulting as Marvel turning Captain America into a Nazi. More recently, DC has decided to bring Watchmen into their continuity with an event called Countdown to Doomsday, which will set up Dr. Manhatten as the big bad.

And that’s Watchmen, a story where the entropy of the tale leaked into the real world and impacted everything that came after. Both stories and the business changed because of Watchmen, for better and for worse – because while most of the copycats are awful, there were some people that saw the substance and started giving us substantive storytelling because of it. Hacktivist was made possible because of Watchmen, Injection is the closest we’re likely to get to what Watchmen actually was. It’s a mixed legacy, but like the ending of the comic, there is hope that the world may change and become a better place.

We’ll have to wait and see.

The second picture is from a fantastic interview with Alan Moore on the nature and craft of writing. You can read it by clicking here.