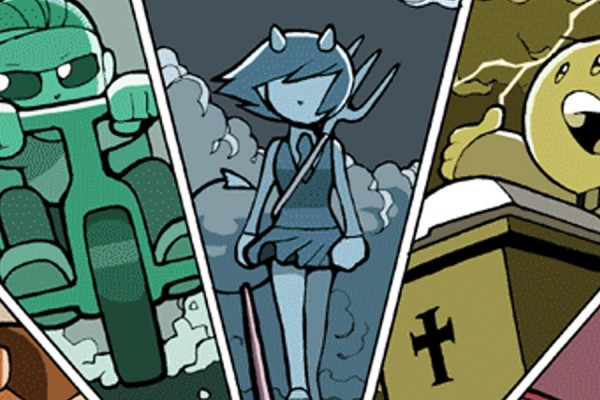 So, every week we do a review of that week’s comics called God of Comics. It’s worked out really well for us, and there’s apparently some people that really enjoy it. Thing of it is, there’s a whole host of comics that don’t have major publishers, and some that don’t need major publishers. There’s indie comics, the ones that are self published and sold at trade shows or online, and there’s webcomics, which use the internet itself as a distribution channel and think about physical media as an afterthought.

A lot of those comics are fantastic, and very few people know that they’re there. We want change that; if we’re going to call an article God of Comics, we should be covering the best the medium has to offer, regardless of distribution channel. So, in order to fix this, we’re going to cover one webcomic and one indie comic during every two week period.

Indie comic reviews will be based on whatever issue or trade we get our mitts on. Webcomics will cover whatever strip or page has been gotten to til that point. The rating system remains the same; we rate on a five symbol scale. The first two symbols are for art, the second two for story, and the last is based on whether we think this is a gateway comic – is this something we would lend to friends to get them into this series? This last one is a tricky thing, but if we think it is, then the comic gets this symbol:

Symbols can be broken down into quarters and look like this from quarter to whole:

. Two symbols is a good comic, three symbols is worth taking the time to hunt down and look at. Anything at four or more symbols is of the highest possible quality.

If you’re interested in having your webcomic or indie comic reviewed, send it to theboss@livingmythmedia.com and we’ll put it in the queue. Anything sent to us will get reviewed – we promise! – on a first come, first serve basis. We also promise honesty in our reviews, which are entirely subjective, but if we like your book we’ll let you and our audience know.

We tend to look at thematic elements when it comes to quality storytelling, and we talk about the context of those stories on our site. Expect spoilers dealing with theme and story here. This is a spoiler warning. You have been warned. We good? Great.

We all good? We ready for this? I’m coming out, so we better get this party started.

From such humble beginnings comes out of the greatest webcomics of all time.

Sinfest is the personal project of Tatsuya Ishida, who uses a deceptively simple format to discuss a multitude of topics ranging from radical feminism to politics to hetero-normativity. It’s a three panel black-and-white comic with a full color Calvin’n’Hobbes-style splash page on Sunday, and its been updated daily since January 17, 2000, with rare exception.

Starting as a commentary on casual and acceptable corruption in mainstream society, the characters were little more than caricatures at first, used to lampoon the accepted levels of hypocrisy that we all rely on to get through our everyday lives. The interesting point about Sinfest is that it looked at this hypocrisy without judgment, accepting it as a part of societal norms.

We all use stories to move through our lives and to justify our actions. There’s things we do every day, small and selfish things that we don’t think about that make other people’s lives worse, and we tend not to notice or brush it off. Pointing this out is considered rude in polite society, because there’s a fear that we’ll be judged for the small indulgences and terrors that we perpetuate.

Sinfest looked at those moments and their self-obsessed viewpoints, not a means of ridicule, but as a part of a shared experience. It started with a look at the selfish knee-jerk need for more that drives a consumerist society, what that can cost, and how little we consider the consequences. From there it began looking at addiction and cognitive apathy in the same light, while introducing characters to deal with those and ever more complex topics.

Religious hypocrisy and expectation played a big part in the early days of the comic, used as a means of fleshing out absolutist philosophies into something a little more understandable. Those that admired the perception of those absolutes were introduced and shown to have as little understanding of those absolutes as any of the other people within that – and our – world.

Those that follow a faith without an understanding of that faith were shown to live in glass houses, their acceptance of tenants they don’t actually understand making them both laughable and sympathetic. Those that see evil as a natural state of psyche were likewise lampooned, the emptiness of solipsism and nihilism both explored and shown to be fruitless.

Politics were brought in and discussed, the comic directly addressing everything from the Economic Crash of 2008 to the life-ending threat of student debt to good intent sometimes having unexpected consequences, and dealing with those consequences. The difficulty of changing one’s life is addressed, how other people can want to lock you in their understanding of who you are. Likewise, there’s a whole ongoing story about how you can lose people in the effort to become a better person, but also what ambition without ethics can cost.

There’s beauty in this comic.

Lately, the comic has been discussing some of the biggest trends in media, the ideas of toxic masculinity, radical feminism, and casual racism. It does so unblinking, Tatsuya Ishida unwilling to back away from the evils he sees in the world and doing everything he can to address them, and that’s what makes this comic as powerful as it is.

Reading and understanding Sinfest is a life-changing experience. There’s humor enough to balance out the harsh honesty of the strip, which is a good thing given the weight of the subjects discussed. The art varies with the need of the story and has improved mightily over the course of the past fifteen years. The strip above was the first, yes, but this is the page from this past Sunday:

Sinfest has been one of my favorite comics for a very long time, and is one of those things that I check daily: wake up, breakfast, Sinfest. For all of these reasons, I cannot recommend it enough. Sinfest can be found by clicking any ‘Sinfest‘ throughout this article.

The People Behind Sinfest Are: