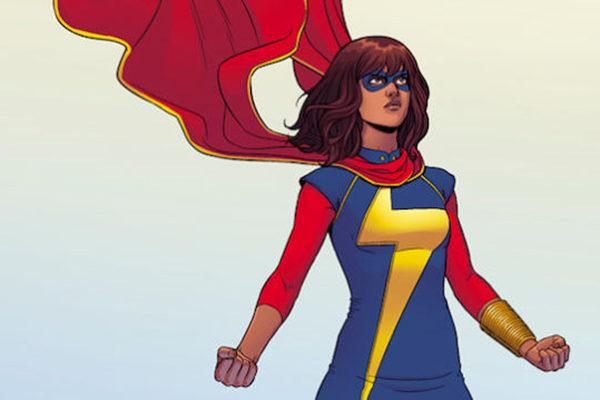 This is why we talk a lot about comics.

Stories are important, and comics do as much to inform our culture as anything else – maybe more, given how much pop culture draws from comics these days. Certain characters are important, and we keep saying that Ms. Marvel is important. Don’t understand why?

If we’re going to change this world for the better, than we need to realize that people are people, period, and that by marginalizing, alienating, and denigrating a group of people, you do nothing but create the monster that you believe them to be – all while becoming that monster yourself.  Ms. Marvel wants you to stop it. Give the benefit of doubt, think it through, and empathize. Do not mistake a rhetoric based on hatred as a truth or philosophy, because it is neither.

Let me show you how.

Take X-Men, as an example. X-Men started out as a team book where the whole team was crushing on Jean Grey – including Professor X. It was a boy’s romance comic, a harem book with four teens and one adult courting a single teenage girl.

Slowly, slowly that shifted. Magneto and later Kitty Pryde was given a Jewish background, and religious ideologies were explored. Nightcrawler, a mutant who looked like a demon, was shown to be a devout Catholic. Thunderbird happened, even if it was only for one issue. Storm, icon that she is, was introduced as a virtual goddess.

These characters gave people that were not white males champions to focus on, because the race of fictional characters does matter. When you see people of your race or religion or gender or sexual preference marginalized or portrayed as monsters, a part of you takes that in. Worse, when other people read those same stories, they take those stories and internalize them – and that affects every interaction that they have with you.

Someone at Marvel started realizing that and we got some incredible characters because of it: Luke Cage, a hero who charges money for his heroism. Brother Voodoo, one of the first positive showings of Santeria in any medium. Northstar, a Canadian hero, being gay and accepted by his teammates.

DC Comics took it even further. Barbara Gordon as Oracle, a woman who overcame the worst sort of physical and mental trauma to become one of the most important players in the DCU. Static and the Jaime Reyes Blue Beetle. Kate Kane and Renee Montoya.

Hispanics were being represented as a positive in comics. Asians and Africans. Christian, Jews, Buddhists, Santerians, Hindus, and others. Gay, Lesbian and Transgendered people. Even the occasional asexual. Comics are willing to provide everyone with a champion.

Yes, comics make mistakes – DC has most of the nu52, and Marvel has their upcoming tribute to Crisis on Infinite Earths. One of the biggest glaring mistakes was a lack of positive Islamic role models, especially in the wake of September 11, 2001.

No, today I’m here to talk about Islamophobia.

America has been taught to need something and someone to blame for what happens to it. The news media was far too quick in picking out a blanket group that they could target and tell people to despise, a new other to replace the old Soviet bogeyman.

Never mind that the Middle-East had been a center of learning and culture for the better part of two thousand years. Yes, there were wars in the past, but they were equal in scale and destruction to those found everywhere else. Islamic held countries had a higher degree of literacy, hygiene, science, and – yes – women’s rights than their European counterparts. There was, in fact, a greater degree of even religious tolerance in Islam-controlled areas of the Middle-East than anywhere in Europe, where non-Christians were persecuted and often burned at the stake without mercy.

Much of the Middle-East’s modern politics are a product of colonialism, which you may know as the driving force behind political instability pretty much the world over. The modern state of Haiti? Colonialism. India? Mexico? The entire continent of Africa? Colonialism.

Colonialism ripped the Middle-East apart and plunged it into bloody warfare that continues to this day. The people that visibly benefit the most from this are Americans, which is why natives those growing up in the Middle-East aren’t overly fond of Americans. Disenfranchised people from that part of the world looking for something to blame (same mistake America made) inevitably blame America. A few unsavoury leaders poke America in the hopes of retaliation, because the idiotic, disproportionate retaliation America gives, results in more disenfranchised people signing up with the terrorists.

Hell, some Americans know exactly what they’re doing and do it anyway. They believe in the end of the world, and they’re hoping to kickstart things. They look at the Book of Revelations not as a warning, but as something to cause.

And now, it is fashionable for the American right to hate on Islam.

So, Muslims become the bad guys in media. Blame Islam, says the news. Anyone who practices Islam is a terrorist in all sorts of movies and television shows and, yes, comics. Efforts are made to dehumanize Islam, to take history out of context, to damn people of that faith for no actual reason whatsoever.

Marvel Comics is challenging that. First, they introduced Dr. Faiza Hussain, a medical doctor living in modern London who happened to be there when Dracula invaded the British Isles. She was instrumental in eventually defeating Dracula and an army of old world vampires intent on sucking the nation dry (colonialism!), and was chosen by King Arthur himself to wield the sword Excalibur. Marvel steered her away from clichés and made her a fully realized character who just happened to be a Muslim woman. It was inspiring.

The new Ms. Marvel, Kamala Khan is a teenage geeky girl who happens to be Muslim and a superhero. She is exactly what Peter Parker used to be – a marginalized teen coming into adulthood and trying to define what that is. She’s an amazing character in one of the best comics anyone is currently publishing, and impossibly important to the real world.

She gives a largely disenfranchised and unjustly hated minority a character ambassador that is far closer to the truth.  She is a rallying point, a person who is choosing to be the best person she can be. She humanizes Islam all by herself, a counterpoint to the fearsome caricature that so many people use to demonize a whole group of people.

And, recently, in response to a public attack in San Francisco, spat out into the world by a group well known for hate speech, Kamala Khan was used as a counter measure – a direct and non-violent response to violence inciting jingoism at its worst, perpetuated by people that should know better.

This is why we talk a lot about comics.

We can all be better than this.