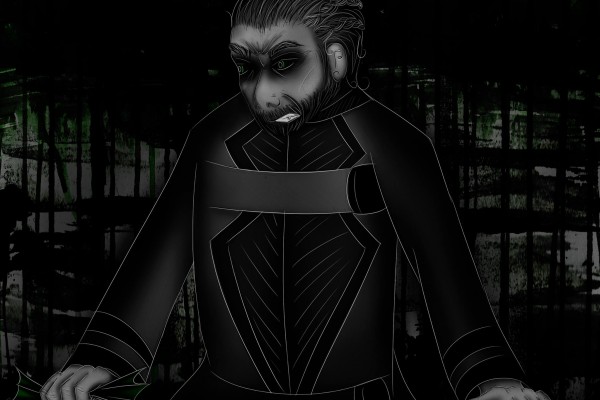 Where was his darling child, his perfect son, the weapon that he had raised so perfectly? Lately he’d been acting like a dryw and Sahr sometimes wondered whether the child was worth keeping – he loved the boy, yes, but the boy was beginning to rebel and to hurt him with the same sharpness that he’d been taught to hurt his mother. It was intolerable, the things that young Endrall would say to him, the things he would do and the demands he would place. He was only a child; he should know enough to listen to his betters, his elders, the people that were wiser and smarter and just plain better than he was.

This wasn’t to say that the boy was not talented. Far from it; the boy was wise in ways that others, quite simply, were not. This was to be expected considering that Endrall was his son, and there was a certain amount of pride that Sahr accepted when it came to acknowledging whom he had sired, even if the mother had been a complete waste and even if the rest of Midgard now agreed with that sentiment. Still, Endrall should have known better. He should have been home days before this present moment.

Sahr immersed himself in what work there was for him to do, a series of wounded nobles that could afford his immediate care and other hurt Vanir that would have to accept lesser healers or wait for him to find a moment. Sahr didn’t care so much; he found the work a distraction from his worry and his anger, still coming to terms with the errant fact that the child he had raised and cared for and defined had once again stepped out of line.

How Dare He Do This.

Figo was back again. He’d been throwing himself into the thickest fights, winning ever greater glory while wandering deeper and deeper into Coeecian territory. Though he wore one of Wyrd’s stupid little fashion accessories he refused to speak of his former love, his bright eyes darkening whenever the Lady was mentioned. Farrell smiled whenever he saw that happen and even Endrall had looked amused when the boy had been present. Sahr sometimes wondered what those two knew that he didn’t, but could get neither of them to speak of what brought such cruel smiles to their faces.

The two of them only spoke briefly. Sahr got the increasing impression that Figo didn’t like him. Hekro certainly didn’t, or Risue, or the Nauthiz Coven, or any of the other nobles that came to see him for his talented hands. He didn’t much care, seeing them all as tools that were trying to take his son’s attention away from where it properly belonged. Endrall would have never been gone so long without word nor been late in returning before he had met them, and Sahr sometimes found himself cursing the time when he had left Lord Figo Jera in his son’s care.

He cursed only the Lady herself, his former wife, and Hekro Gherlid so often. The former for what she was, the middle for what she had done, and the last for the similarities she bore to his old wife. He had caught Endrall making eyes at the warrior, but his darling son had denied feeling anything for the old woman. He believed his child; he had raised him to have better taste in lovers than that.

Endrall was supposed to be visiting with the northern Lady, that stupid whore. He had contacted the Lady already and asked her where his son was, using the base sciences and circuits that the Vanir employed. He had learned how to do this specifically to keep track of his son. The Good Lady had told him that his son had left and would be home when he was home.

“She’s drugged him,” Farrell would slur, quiet in his cups day after day. “She’s addicted to more narcotics that you can imagine or that I can name. That’s why Figo left her up there alone. She’s drugged him and will make him an addict. Everything that you think he might be he won’t be because he’ll prefer to be sheathed in her rather than doing anything you believe is of value.”

Sahr believed the fox. What did he have to gain from lying? Certainly not his son, not the way that Wyrd did. She would take him the way his wife had taken him, the lying dryw, and she would scar him, hurt him, and ruin his life.

He luxuriated in the things he had, seeping into the illusions of wealth in an effort to stay distracted. Every carriage was a broken promise that his son was home, building his rage into fury, cementing his anger into something as solid and painful and right as any levl. He wanted to burn the world. How dare Endrall do this to him. How dare his son betray him like this. 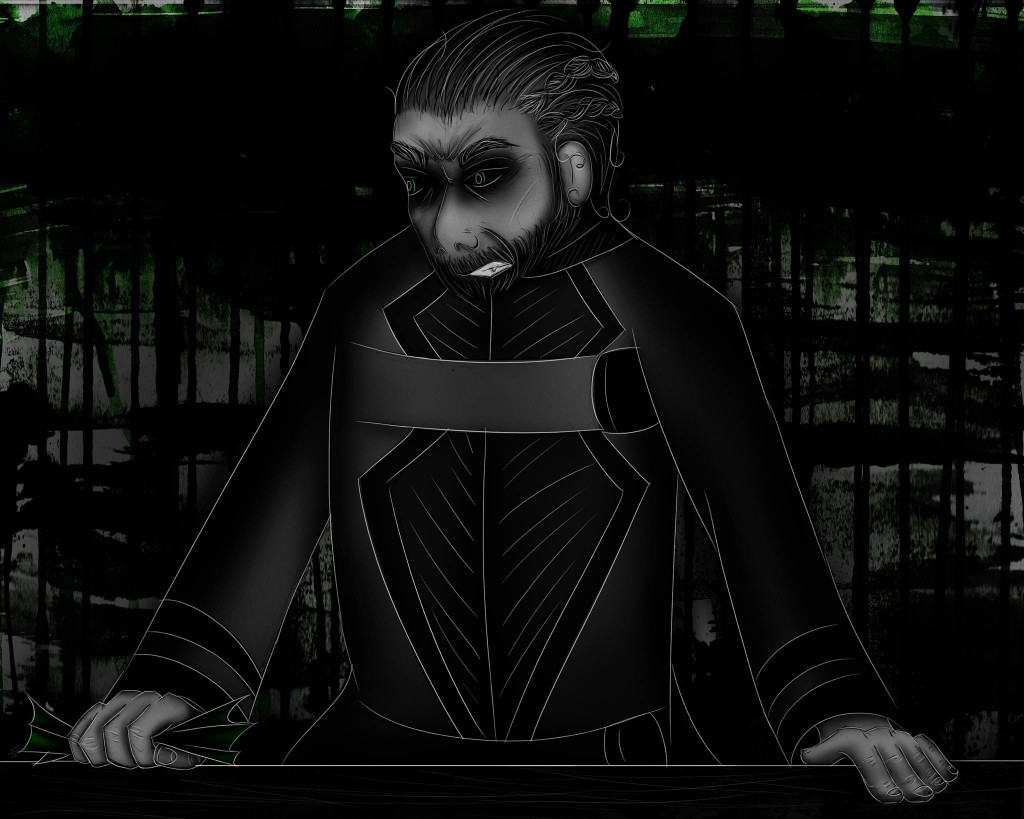 When Endrall finally did show up weeks after he should have returned, Sahr walked away from the surgery he was performing and went directly to the boy, demanding leave to perform a physical examination on him right then and there. The boy protested but what the boy wanted did not matter – only Sahr’s needs mattered, only his will counted, especially given all the worry and frustration that he had felt. He ignored the boy’s protests and hysterics as the trivialities they were; the boy had no rights and no identity other than those that Sahr chose to give him, and right then he chose to give his child nothing.

The taint of the Wyrd woman was still on him, barely there but there all the same. He could find no traces of narcotics in his system but that meant nothing – she could have access to intoxicants from other nations, wilder nations, might have possibly infused Sahr’s child with poisons that Sahr knew nothing about. He went further than even this, tracing the marks that old villain had left on his child even as Endrall said that he had just lost track of time, a confession that proved the words the woman had given him a lie.

Endrall protested and screamed about how his privacy was being invaded but his ravings were the ravings of a child and safely ignored. Sahr summoned the guards and ordered Endrall confined to his rooms, and then used the Process to contact the woman that had tried to steal his son from him. Yes, Endrall had eventually returned and, yes, Endrall was now home and safe, but still the woman had tried to steal him away and had lied about that and who knew how many other things.

He used the Process but there was no response from that far away keep to the north. He screamed at Endrall, struck Endrall, forcing Endrall to try and contact the woman. There was no response. He turned his attention to the manservant that the woman’s family had placed in her home to keep an eye on her and was able to get a hold of him. He didn’t know where the woman was, but he told Sahr that he would have her contact him upon her return.

Sahr forced Endrall to his knees, forced the boy to remember that his father was the only one that would ever truly love him and that he was utterly worthless without that affection. The boy shook but refused to cry, refused to crack or bend. Sahr didn’t care, continuing to scream until the boy was shivering and holding himself in his silence. He reminded his son that women – especially older women – were not to be trusted and never to be taken as lovers, never to be loved or spoken to except in polite company. The boy said nothing but still Sahr could see the glimmering fires of rebellion in his child’s eyes.

“The woman is a coward,” Farrell told him. “She will not contact you. She will ignore you, forget you called, come up with some excuse. Come, I took some of her notes from Endrall. Read them for yourself. It’s plain to see that the narcotics she has ingested have driven her insane.”

Sahr read them, attempting an open mind, but with every word he read he imagined that woman’s tongue running along the flesh of his son. The words were senseless, the intent without meaning. The woman was clearly insane, a flaw. Endrall would have to be made to see that.

The good Lady used the Process to contact him within the week.

“I was out in the wild where no one could reach me,” she confessed. “I needed to get away.”

“From your sins?” Sahr sneered. The woman said nothing. “What you have done is deplorable. You are a coward and a fiend and a whore. I’ve read your writings and I know you to be nothing but some insane harlot, a charlatan hellbent on filling the empty void that exists where your soul should be. You are a liar, a thief, and a hypocrite and there is nothing you can offer my son except suffering.”

The woman said nothing in her own defense, undoubtedly seeing the truth in Sahr’s statements.

“It took guts for you to contact me,” Sahr admitted, willing to give her at least that much.

“It was the right thing to do.”

The simplicity of that reply infuriated him all over again.

A season later, he would talk to Figo about it, believing that the White Rose had to know more about the woman than anyone else after having spent so long with her. Figo would not speak of why he had left her but he refused to believe the truths Farrell offered regarding the woman’s addiction.

“She never lied to me when I was with her,” Figo said, his eyes shadowed. “I do not think she can lie. She hides much of what she knows and her beliefs are twisted but she does not lie, at least not of her own accord.” Sahr pretended to accept Figo’s words and then left him with whatever care a fool could be given – for he was a fool. He had to be a fool and he had to be wrong.

The alternative was not a thing to be considered.