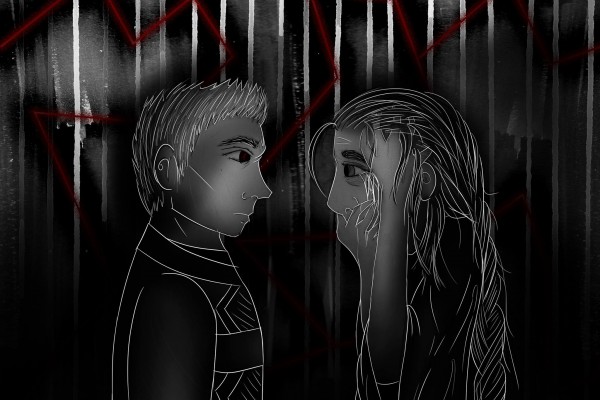 It was a strangeness, to be sure. Sotaas was uncertain how he felt about it, especially at first. There was a closeness between Veskur and Endrall that he didn’t want to get between, but Veskur seemed to be alright with it – or, at least, she seemed to be as alright with it as she was capable of being – and Endrall was all for it. The boy spent four days regaling him with reasons why they should be lovers but still Sotaas was not certain; they knew each other only barely and had nothing to fall back on if anything should go wrong, save their mutual tie to the Lady Wyrd.

However, Endrall was insistent, so much more insistent than Sotaas was willful. Endrall held him and he felt something he had not felt in so many long years – loved, wanted, desired, cherished. And though Sotaas was older than Endrall, the boy still seemed so wise, so powerful. He walked into a room and all eyes turned to him and there was something nice about being woven to someone possessed of such gravity.

So much of Sotaas’ depth was hidden. Like a mountain, much of what made him who he was, was kept safe from eyes that might otherwise search those qualities out. Betrayal and betrayal and betrayal had taught him to do this, and so he played to his own consul, living up to his ideals as best he could and never compromising those ideals in spite of the problems and troubles that continued to assault him.

The first five seasons he was in Endrall’s arms made him feel safer than ever he had been. Endrall made him feel like he could trust people again, like he could conquer the world. The gaurn that Veskur and he had made also helped: Sotaas found himself wandering the wild places with an ease that no other noble of his House had ever dreamed of possessing, leaving no sign or mark of his passage. Thanks to this new Science, he was now always able to find shelter or location, always knew what was around him and where he was. He had always been talented at navigating the stranger roads outside of Midgard, but now his House looked to him as if he were the greatest scout their line had produced.

He was not certain how to deal with the attention that consistently sought him out.

He and Veskur were still experimenting with his gaurn, still trying to determine what it was fully capable of. The survivability and alertness he experienced while wearing the tool, to say nothing of the capacity to fade into the wider world, were apparently not enough for the Good Lady. She seemed to think that there should be more to the wonders that this tool could produce, but Sotaas was not so certain. Wasn’t what they had accomplished enough?

Sotaas did not need to ask to know what Veskur’s opinion on that would have been.

Their work brought them closer and closer, though sometimes Veskur would pass on the chance to re-examine the equations that seemed to be her only joy so that they could look at the myths of faraway cultures. It was through these studies that Sotaas learned more about the Hsien and the Kami, the Trahmin and the Darroken, the Zaerm and even the Coeecians. These studies kept him amused. He wasn’t certain what Veskur was searching for in the lies that the lesser nations used to justify their place in this world.

In the quieter hours of the night, Sotaas admitted to himself that he didn’t care what Veskur was looking for. It passed the time, and gave him more of an excuse to wander further and further from the lands any Vanir knew.

When things turned dark with Endrall they would both turn to Veskur. Endrall would retreat and spend some time alone with her, and then the Good Lady would talk with him and then everything would be alright again, at least for a little while. Sotaas wondered what the two of them got up to, but believed that Endrall was up front about everything they did. Veskur herself sometimes asked Sotaas if he knew what the two of them were doing and Sotaas said that he did, confident that Endrall was hiding nothing from him.

It would be seasons later that he would learn otherwise.

Endrall was going to Veskur for physical affection in addition to whatever advice the Good Lady could offer. Outside what Sotaas had been told, the two of them were exploring one another with a desperate hunger that bordered on insanity. Sotaas sat still and quiet when he learned this. He could be forgiving. He and Endrall spoke of it for a time and then he went to confront Veskur, who shook and looked even paler than usual and would not meet Sotaas’ eyes. 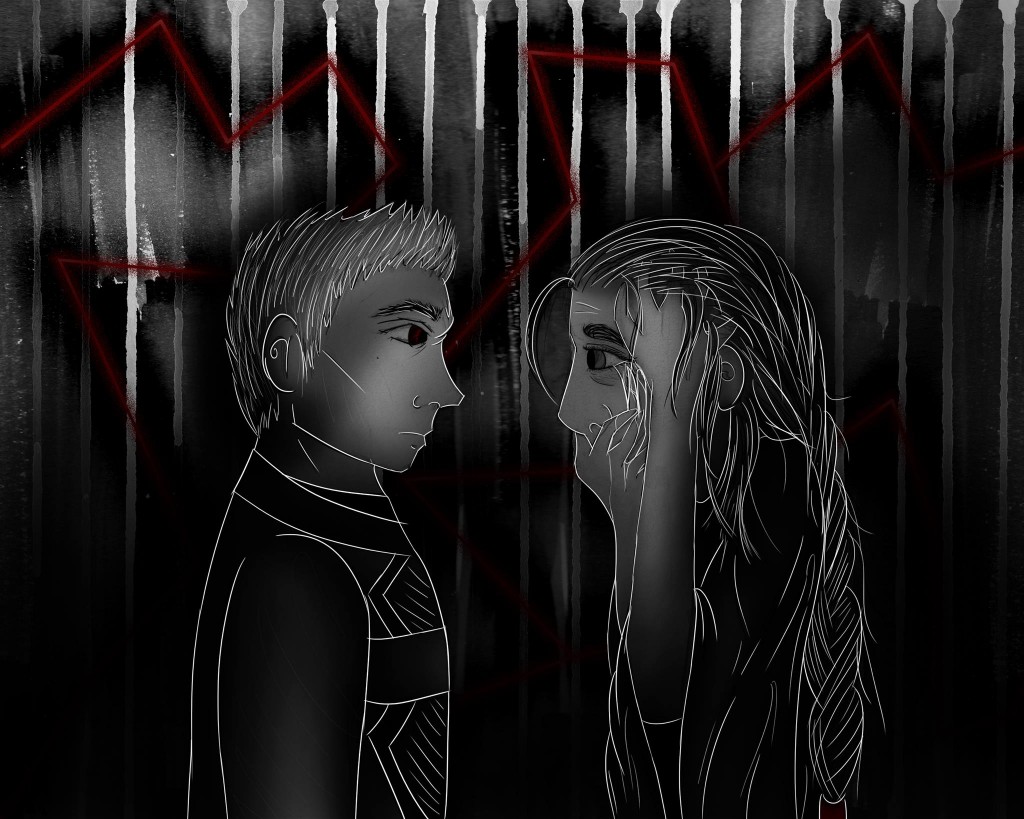 They talked everything out, Veskur confessing her entire litany of sins, of every time that Endrall had come to her for comfort. Sotaas listened and was reminded of the core betrayals that had shaped his life – the time his mother had abandoned him in the wilds to die, the time his closest friend had turned on him and tried to destroy him – but this was something new. His mother’s sin had been apathy and his friend had acted out of sheer malicious spite, but Veskur had believed they were being open with one another when they had not been.

It was damaging, terribly damaging to the tie between them, but that tie and the order of Deeam kept the two of them talking and they worked what crossed them to a parallel.

All that crossed between him and Endrall, however, was harder. Endrall berated him, mocked him, tried to make him feel less while depending on him for emotional stability. He tried to undermine every dream Sotaas built for himself, doubted the rightness of his decisions, made him question the purity of his vision or the strength of his will. And whenever he questioned him on this or pointed out the flaws in the boy’s logic Endrall would explode, yelling information that spun in circles before fleeing back to Veskur, still expecting the Good Lady to set things right.

The Good Lady always seemed to find the time to set things right.

When Endrall announced that he was going to the Darroken lands and that he intended to bring Sotaas with him, Sotaas was ecstatic. Here was a chance for the two of them to escape the confines of Midgard and talk things over without the shadow of Sahr Eri looming over them or the spiked balm of Veskur Wyrd there to soothe the fury in their hearts.

From the moment they left, however, things began to sour. Endrall sat back and expected him to handle everything. “You’re from House Ygg,” he would say, looking down at Sotaas with contempt. “You’re supposed to be able to find your way around wherever you happen to find yourself.” And, though he could do this even without the gaurn he had left behind, Sotaas’ victories were still not quick enough to satisfy the man that had brought him here.

Endrall grew sick as well as insulting. Farrell came and met them in the Darroken capital and spent his time drinking and seducing everyone around himself with a leer on his face. Sotaas never slept with the fox but the two of them went out often, whenever Endrall’s moods became too much for Sotaas to take. The two of them would crawl from one pub to the next. Farrell liked to get other people intoxicated so that he could have his way with them; Sotaas just wanted to dull the pain.

By the time they returned from the Darroken lands, things were over between he and Endrall. Endrall could not even be bothered to say anything that was not an insult. To add injury, the moment they were back he fled north and entered the Good Lady’s keep, falling into the eager arms of the woman that lived there. Sotaas would hear later about how Endrall cried and cried over how badly he had failed him, these claims made with a vehemence equaled only by Endrall’s accusations that the Good Lady had taken advantage of him in a moment of weakness.

It didn’t matter at that point. Sotaas wanted nothing to do with either of them or anyone else. He wrapped the gaurn around his hand and went to House Wynn, took Deeam aside and spat at his feet and told him that he was washing his hands of all of it. Deeam looked concerned, even offered to listen, but Sotaas was having none of it, not then, not ever again. Growling, he spun the sigil on the back of his hand and activated the Ethcinos Sciences that he and Veskur had been working on for so long, fading into the background and walking into the wilds.

No one would find him. No one would ever find him and he never wanted to speak with any of them, not ever again, not after the insult and the injury he had suffered at the hands of those people that had once claimed to love him as much as they loved their own lives.