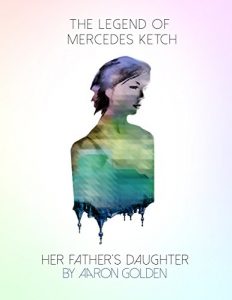 Available on Amazon.com, Amazon.ca, and iTunes.
Learn more at MercedesKetch.com

Mercedes Ketch is no average girl. The only daughter of the world’s top authorities in long lost cultures, Mercedes is the best of both her parents, gifted with unique abilities… but she’s about to learn that there’s a cost to looking into histories that a powerful cabal would rather have forgotten.

Her parents are murdered for what they know – that all the old myths are true. An ancient bloodline, the Kinguim, hides the fact that magic flourishes in the modern world – Goblins, Elves, Vampires, and Werewolves stalk their prey unnoticed on city streets on behalf of their Kinguim masters.

Having been inducted into a secret knighthood, Mercedes finds herself part of a war three thousand years in the making. The lore that her parents died to discover – lore that lives on only within her – is the sole thing standing between that knighthood’s survival or its complete annihilation, but only if she can decipher those secrets before the end claims them all… 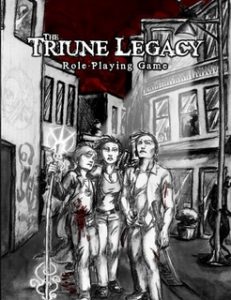 The Triune Legacy is an original new modern fantasy roleplaying game. Too many games take the focus away from people in favor of varying sociopaths, monsters, and worse – but we ourselves and the people around us make the world and define it. We are the true monsters, the true heroes, saints and sinners all. Humanity; when did the very concept of humanity become such a commodity?

The mechanics are designed to help create and balance both complex character concepts and standard builds. Integrating Psychologies, Job Archetypes, and Advantages guides novice and mature players in maintaining the essence of a character during gameplay. The flexibility of The Triune Legacy provides you with the ability to stat out anything you could possibly imagine…

It is now modern day and you have come to know this: Magic is real. The mind leaves the body during sleep. The dead watch the living with envious eyes. A six-thousand-year-old conspiracy. Will you free the world? Use your power to remake it in your own image? Be a hero? A saint? A villain? A nightmare?

The choice is yours.