The Truth – The Most Dangerous People in America 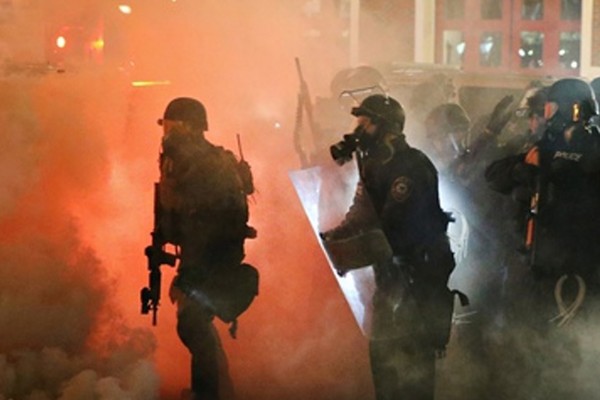 Ho-hum. Just another day in the United States of America. We expect this now. It’s common place, to the point where many people see this and think ‘what did the girl do to deserve that?‘ or, worse still, ‘given that cops are violent crazy people, why would you ever disobey one?‘ And, yes, this seems like it might actually be a best case scenario. The police officer, in service and protection, didn’t kill the girl on sight, taze her to death, choke her to death, or lock her up and leave her to die. That makes her luckier than the more than eight hundred unarmed bystanders that police officers have kill so far this year – not people involved in crimes or suspected of crimes, just people that happened to be alive when they met cops and then weren’t.

Cops have a tough job. We’re not saying that they don’t. They have one of the hardest jobs in the world, and we as a society have given them a power we give no one else – the power to end the lives of other civilians within our civilization. They are supposed to uphold the law with a sense of justice; the word “police officer” means “office of the city’s people,” with connotations that these are the best humanity has to offer. Guardians. Protectors. The ones we turn to and trust to protect us.

And maybe that once was the case. And, sure, most cops are going to be good people. Well, some of them. A few of them, surely? See, the thing of it is, when a police officer helps to cover up the murder or assault perpetrated by another police officer, that cop stops being a good guy. That cop is now aiding and abetting a criminal, and because of that decision a criminal is walking free with a power that they are going to keep abusing.

There’s reasons for this, though. Violent crime is on the ri… oh, wait, that’s been on a steady decline for the past decade. Still, it’s a hard job. They see the worst that humanity has to offer with very little in the way of reward, and they protect us from dangerous criminals. You can rely on police to help you at any time and to keep your family safe. Cops are the best of us, honest, stalwart, and brave.

Maybe they were, once upon a time; we don’t know. We do know that the public perception of cops has changed. We know that people are getting in the habit of filming police officers whenever they show up, and that the police are angry that we’re now recording them, that they don’t like the idea of body cameras. Cops like being able to act with impunity, but have been increasingly unable to handle the responsibility we’ve given them.

Or maybe it’s just us.

We like to think it was better once upon a time. You’d get stories of cops doing terrible things, but the officer was right there. Smiling. Happy. Confident. That’s not the kind of man that could do a bad thing, right? A pillar of the community. I’m going to put forth that it was never better – it’s just that everyone is carrying a camera now, and we can see how vile, violent, and vicious cops are now.

No wonder they want us to stop filming them.

Funny thing is, cops are supposed to have body cameras and cameras on their cars, for their protection as well as ours. They’re supposed to be accountable. Cameras often get turned off and footage goes missing or gets edited. Worse, the people investigating cop wrong-doings are often cops themselves, and they find themselves innocent despite the evidence far too often.

This is not to say all cops are bad. There’s good cops out there, great cops that are doing good things, but they’re the ones we don’t hear about too often because too many of them are breaking the law and otherwise terrorizing people.

So, the question is a simple one – why? Why are cops such violent psychopaths? The answer is equally simple: training. Cops are supposed to de-esculate situations, but their training often makes them violent, and the stress of their job is enough to make anyone mentally ill. It’s a hard and largely thankless job, but cops need to learn how to solve problems without resorting to violence, and they need time to recover mentally from the terrible things we pay them to protect us from.

Because police officers are necessary given our population, economic model, and justice system. We need them to save us from the broken souls coming out of the for-profit prison system and the thieves that take everything from us without consequence. That’s just truth.

So, stop giving cops military ordinance they don’t need and start giving them the training they need to not kill people. If you’re going to take the money normally spent on education, welfare, healthcare, and the other services that stop crime, or to pay off mistakes cops made in years gone by, then make sure it does some good and get cops the training they need.

We know they know how to kill people. We see them do that plenty, but we expect more: Service. Protection. Dignity. Let’s see more cops like this and less of this. Let’s see the police earn the respect they once had and have now lost before things turn bad.

Because riots are the language of the unheard.

I didn’t say that. Martin Luther King did – “It is not enough for me to stand before you tonight and condemn riots. It would be morally irresponsible for me to do that without, at the same time, condemning the contingent, intolerable conditions that exist in our society. These conditions are the things that cause individuals to feel that they have no other alternative than to engage in violent rebellions to get attention. And I must say tonight that a riot is the language of the unheard.”

So, with all that in mind, here’s another question: can you hear us now?