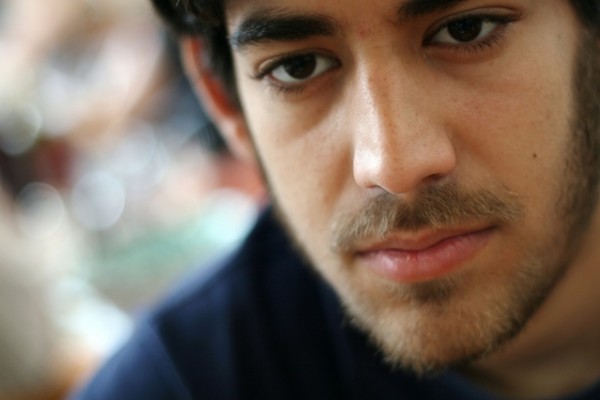 This man is the inspiration for this column. Everyone to be honored under this title is being done so in his name, and that needs to be said. Our sincere condolences to his family, first and foremost, for his loss. And our condolences to this world, which is a lesser place without him.

Aaron Swartz, you will be missed. Thank you for everything.

Aaron Swartz was born in 1986. He proved to be a genius prodigy, taking an interest in the burgeoning creation of internet culture and technologies. At the age of thirteen he had already  begun the process of defining what the internet would become by developing the code for RSS (Really Simple Syndication).

What this code does is allow web browsers to more quickly recognize and load websites for viewing, a process that makes Google, Amazon, YouTube, FaceBook, and any information based web service possible.. RSS is part of the baseline structure of the modern internet – without it, this page and every other page we all take for granted will not work.

The short history of the internet is full of people who have turned such feats into a living, and been content to live off the proceeds of one great act. Aaron Swartz was not such a man.

Instead, he developed the site Infogami, a message board for activists, misfits, innovators, and the other creatives that the internet allowed to connect. This site would later become Reddit, a site which has since played a major roll in everything from the Occupy Movement to the Arab Spring to the fight against SOPA and PIPA.

During this time, he donated much of his money to the development of new and better technologies while immersing himself in politics – not for personal gain, but for the sake of making the American Dream a reality for everyone. He championed the best possible causes for everyone, first and foremost fighting for the freedom of information and for an informed populace.

Aaron was one of the principle and most public opponents of SOPA and PIPA, pieces of legislature proposed by the RIAA and MPAA that would have destroyed the internet as we know it and would have strangled the Information Age in its infancy. As the face of the anti-SOPA/PIPA movement, he helped to protect the internet, freedom of speech, and humanity as a whole. His victory in this matter would be one of the reasons that the Department of Justice would begin looking for some means of attacking him.

He took advantage of legalities to put judicial papers in the hands of the public when his government decided to charge people for work that had already been paid for. He was also in the process of using this information to investigate the wrongful persecution by the government of other programmers and activists, including those responsible for exposing travesties such as Guantanamo Bay.

The world took note of his many good works and he was invited to join the Center of Ethics at Harvard University.

Great intelligence, however, always seems to come with a price. For Aaron Swartz that price was depression, which he fought against for the entirety of his life. This struggle makes everything he achieved all the more miraculous and worthy of praise.

Most recently, the American Government decided to prosecute him for the crime of clogging up “a series of tubes,” the inconvenience of which is best compared to waiting in line behind someone who is writing a cheque at a grocery store.

Having decided that this was a felony, they threatened him with fifty years in prison, and while they did not have any real case it would have cost Aaron Swartz $1.5 million to defend himself, money he would never be able to re-coup despite the fact that the government did not actually have the proper warrants for a search and seizure of the laptop he had placed to collect the contested articles.

Although the parties that Aaron had taken these articles from wanted all charges dropped, the Department of Justice insisted on pursuing this crime for political reasons, the head prosecutors both telling colleagues that they were looking for high-profile cases by which they could accelerate their political careers.

Aaron was offered a series of plea bargains, the least worst of which would have placed him in prison for six months, but only if agreed to plead guilty to six felony charges. To be classified as a felon would have dismissed him from working in most corporations, would have crippled his reputation, and would have permanently disabled several of his rights as a US citizen. He wanted to press for trial, but the US Department of Justice delayed that for the better part of two years.

The threat of prison and the attacks on his family by that Government and the stealing of his wealth, liberty, and ability to live life combined with his depression, finally overwhelming him. On January 11, 2013, he was found hanging from a noose at his home, a victim of the travesty the American Justice System has become.

He is mourned by his family, his partner, the entirety of Internet Culture, and every life on this world that he helped make better.

We all owe Aaron Swartz a massive debt of gratitude for all he accomplished and all he did for us – not for personal gain, but out of the purest possible altruism. He is the very definition of what it is to be a hero, and we here at Living Myth Media have the highest possible respect for him and everything he accomplished.