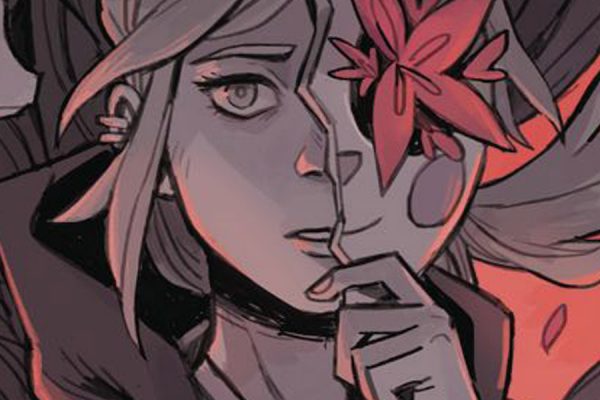 Quietly, over in a corner that needs more light, Mia Goodwin has been writing a tragedy that is like nothing you’ve ever seen.

Tomboy is a story about corporate greed and political corruption in a small town rocked by the murder of a high school girl and the girl’s best friend, Addison, turning into a literal magical girl that is more than even what that entails. Her family life is complicated as her grandfather uses her power like a weapon to weed out evil and corruption, but the process is making her less gray and more a reflection of what she’s supposed to fight against.

Meanwhile, her cop father is investigating the trail of bodies his daughter is leaving in her wake. His partner died investigating the corruption that he was a part of and now haunts the father, offering what advice and protection he can to Addison’s dad, but we know that protection is as flimsy as ghost-stuff.

That really got driven home last issue, and…

This comic is not for the faint of heart. It’s all bright day-glo colors juxtaposed with gory murder and complex questions about the soul, the workings of the cosmos, ethics as a protective shield against madness, and the bonds of family and friends. It’s vicious and brutal and we’ve loved every page, every panel, every frame. Mia has written this story with the deft skill of a surgeon or a serial killer or both, plying her craft with a scalpel’s precision, and the result is a comic that it is impossible to look away from.

And this is it. This is where the whole story ends and we see the final effect of what’s been wrought, and one can’t help but feel that there’s more going on here than simple ink and color on canvas.

When James O’Barr wrote the Crow, A.A. Attanasio compared it to ritual work, essentially calling that story out as a magical working. The same should be said about Tomboy – it is a chthonic working, the sort of ritual that comes from the oldest parts of the mind and rails against destiny and fate and what we have become. It turns a town into a killing field and uses the final price of life to try and make the world better, answers nihilism with a reminder that bright colors do not equal emptiness.

Depth is where you find it, and we’ve found it in the pages of this comic. So should you.