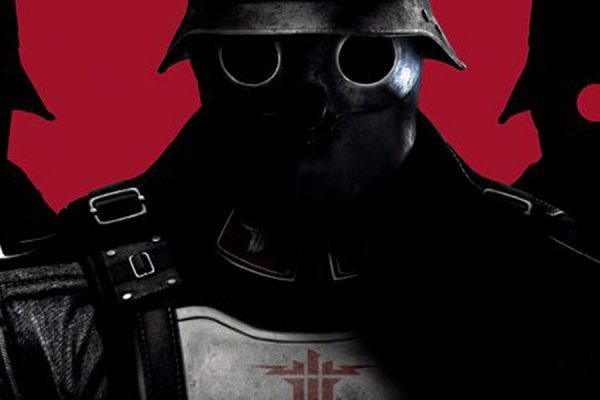 Feels like we were just talking about writer Dan Watters last week. What was he working on? Little Nightmares? Assassin’s Creed? No, no, it was the Shadow.

I want you to take a look at that list, though. Those three comics and what the narratives of those games deal with. Little Nightmares is about the grotesque rich and an all-consuming gluttony resulting in the loss of soul and eventual destruction. Assassin’s Creed is about a war through time between religious zealots and those that have sought to stop them. And, of course, the latest iteration of the Shadow deals with finding out what evil lurks in the hearts of men and causes greater degrees of evil, the root causes of the symptoms that are killing every living thing on our planet.

Combine the darknesses inherent in those three villains and you have Nazis, which means that Dan is well equipped to deal with the horrors of this comic.

For those of you that don’t know, Wolfenstein is a video games series about a Jewish soldier named B.J. Blazkowicz who was captured by Nazis, taken behind enemy lines, and then killed his way through every last bastard that wanted to make the Fatherland Great Again,because you cannot talk to people who are advocating for genocide. Ask anyone that spoke with the Nazis about peace treaties how well that went… or take a look at the American South, and the cancer that is now killing the American Dream because someone decided they did not want to hurt the feelings of fascists and slave owners.

It’s interesting: the Nazi party borrowed some of their ideas and culture from the American Confederacy, those traitors that went to war to keep slaves and who used the slave trade to bolster their economy. The Nazis then used the inertial constancy of European antisemitism to advocate for genocide and made the world complicit in their action when they offered to send the people they were going to exterminate to anywhere that wasn’t Germany.

Germans know about this. They’re taught about it in school. They learn about their history, the good and the bad – and there is good there, a manic genius that has informed much of the world for the better. Americans do not because they edit out the parts of their history they don’t like. This is why Neo-Nazis are allowed to exist, why people think the Confederacy turned traitor for reasons other than slavery, why Republicans are the way they were – if you don’t understand where you come from you cannot control where you’re going.

Recent Wolfenstein games have been brutal on this point. They dig into the horror of Nazism, the sheer vicious inhumanity of it and still come up short because it’s hard to fully capture the degradation that genocide entails. Still, they try as best they can and the most recent version decides to expose the horror in a whole new light:

Makes your skin crawl, doesn’t it?

This is the world that Nick Spencer and his ilk are fighting for, the one that moderate liberals will let happen because they would rather talk when someone is calling for the execution for African-American and LGBT+ and Romani and Jewish and Hispanic lives, among others. This is the world that Dan Watters will look at unblinking, and ask you to do the same. It is not an easy task, or a pleasant one. We do not want to fight but there is little choice when you have actual Nazis pushing actual genocide into the public discourse.

Dan is working with the art team of Piotr Kowalski and Ronilson Freire, the former a resident of Poland and the latter a resident of Brazil. Poland was the home of Auschwitz and the worst of the Nazis’ offenses, while Brazil is next to a place where many of the Nazi leadership fled after the war. Both countries have suffered the taint of that evil, and both of them understand the importance of this comic.

This war should be over but it isn’t. Look into what America being made great again by Trump and his ilk looks like. Take a good long look by reading this comic and decide of that sort of fear and murder is something that you can stomach. And then, for the love of the morality you claim to love so much, go out and punch a fucking Nazi.