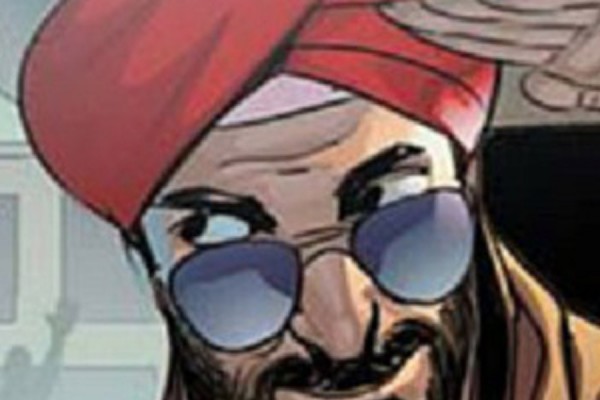 So, every week we do a review of that week’s comics called God of Comics. It’s worked out really well for us, and there’s apparently some people that really enjoy it. Thing of it is, there’s a whole host of comics that don’t have major publishers, and some that don’t need major publishers. There’s indie comics, the ones that are self published and sold at trade shows or online, and there’s webcomics, which use the internet itself as a distribution channel and think about physical media as an afterthought.

A lot of those comics are fantastic, and very few people know that they’re there. We want change that; if we’re going to call an article God of Comics, we should be covering the best the medium has to offer, regardless of distribution channel. So, in order to fix this, we’re going to cover one webcomic and one indie comic during every two week period.

Indie comic reviews will be based on whatever issue or trade we get our mitts on. Webcomics will cover whatever strip or page has been gotten to til that point. The rating system remains the same; we rate on a five symbol scale. The first two symbols are for art, the second two for story, and the last is based on whether we think this is a gateway comic – is this something we would lend to friends to get them into this series? This last one is a tricky thing, but if we think it is, then the comic gets this symbol:

Symbols can be broken down into quarters and look like this from quarter to whole:

. Two symbols is a good comic, three symbols is worth taking the time to hunt down and look at. Anything at four or more symbols is of the highest possible quality.

If you’re interested in having your webcomic or indie comic reviewed, send it to theboss@livingmythmedia.com and we’ll put it in the queue. Anything sent to us will get reviewed – we promise! – on a first come, first serve basis. We also promise honesty in our reviews, which are entirely subjective, but if we like your book we’ll let you and our audience know.

We tend to look at thematic elements when it comes to quality storytelling, and we talk about the context of those stories on our site. Expect spoilers dealing with theme and story here. This is a spoiler warning. You have been warned. We good? Great.

We all good? We ready for this? Let’s take this party downstairs. 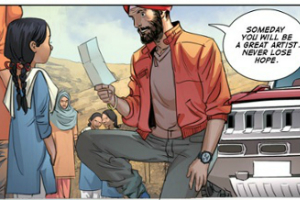 There’s a general level of confusion about people in the Excited States of America. The Bill O’Reillys and Sean Hannitys of the world have a thing about spreading fear and hate without any understanding of what it is they fear or hate beyond it being other, and therefore bad. Their re-actionary violence – which caused many of the problems they’re now trying to fix with more violence – makes every situation worse, and is causing problems both at home and abroad.

Art is often used to address various social issues, and comics have a fairly good track record of slipping under the radar to inform people of what’s really going on. From Magneto: Testament or the Black Panther books from Marvel to DC Comics tackling drug culture to Steve Rogers walking away from the Captain America identity during the Nixon years, comics have always been a form of protest and information.

Super Sikh is very much in that vein.

Sikhism is one of the most misunderstood faiths in America. Popular channels like Fox, CNN, and MSNBC all like to lump people from the Middle-East as Muslims and call it a day, but there’s a rich tapestry of faiths and morals from that part of the world that predate the birth of America itself, and all of them have the good and bad aspects that come along with any other group of faithful people living in a secular world.

At it’s best, Sikhism has promoted tolerance and acceptance of other faiths, and has actively sought converts only rarely. They’re a military faith, dedicated to good and moral living, and there’s a flexibility that allows their ethical code to grow with the times and become more accepting of the world as it changes. There’s a lot of good to be said for the faith, but that tends to be true of most faiths in theory. It’s the practice where people sometimes mess things up.

Remember kids: religion isn’t the problem, politics and greed are.

Super Sikh deals with a UN-approved secret agent who happens to be a Sikh, living up to the precepts of the Gurus and doing the best he can to make the world a better place. He works in and around Amritsar, India, where he rescues people from terrorists, works in a soup kitchen, and listens to Elvis. He spends every waking moment fighting the good fight, and his family and even his boss think that he needs a vacation, so after he manages to save some girls who want an education from a bunch of people that are abusing their faith for political reasons and encourages those girls to pursue their dreams of education, his family encourages him to take a vacation.

He books a trip to Memphis, because he kind of loves Elvis (and who doesn’t love the public persona of Elvis? Lilo and Stitch taught us so much), and things sort of go wrong from there due to actual terrorists and misinformed idiots who buy into the lies propagated by the popular channels we listed above.

It’s all done with a good level of humor; the dialogue is witty and intelligent, and even the minor characters feel like people in a larger world. The art looks like something from a mainstream comic, with a cinematic use of camera angles and page layout that makes the whole thing a joy to read. There’s subtle changes in the art that build towards the climax of the first issue that highlight the change of venue and makes that moment much more powerful.

This is a really good comic, in other words, and one that we would recommend. If you happen to come across it, snatch it up or just click this sentence, which will take you to a place where you can buy Super Sikh #1 and have it shipped directly to you.

The People behind Super Sikh are:

Cover and Art by Amit Tayal