Marvel, We Need to Talk 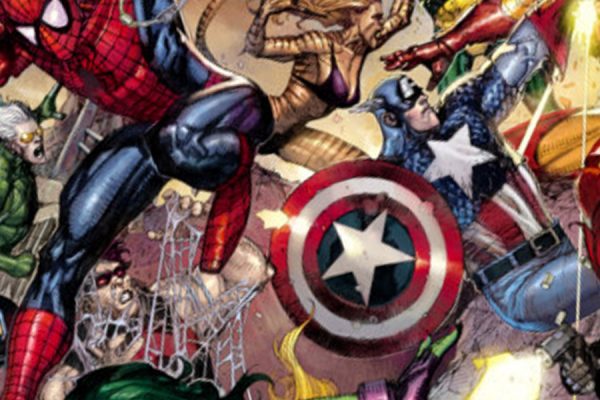 Oh, Marvel. Your comics were doing so well.

I mean, sure, you’d accidentally turned Iron Man into a villain with Civil Warand spent the better part of a decade trying to fix the damage you did there only to finally give up and hit the cosmic reset button on your whole universe. Or the time you had Doc Ock turn into Spider-Man, which wouldn’t have been nearly so bad if the writing wasn’t terrible and your editorial board hadn’t doubled down on no, guys, for real, this is what we’re doing going forward. It wasn’t, we knew it wasn’t, and being lied to in the age of internet is kind of a turn-off. Mind you, that’s not the worst thing you’ve done with Spider-Man (hi, One More Day!), but you seemed to have things under control with your side comics: Spider-Gwen, Moongirl and Devil Dinosaur, Mighty Thor, Unworthy Thor, Ghost Rider… you’ve got a lot of good going on.

“What we heard was that people didn’t want any more diversity. They didn’t want female characters out there. That’s what we heard, whether we believe that or not. I don’t know that that’s really true, but that’s what we saw in sales. We saw the sales of any character that was diverse, any character that was new, our female characters, anything that was not a core Marvel character, people were turning their nose up against. That was difficult for us because we had a lot of fresh, new, exciting ideas that we were trying to get out and nothing new really worked.”

This wonderful little bit of what comes to us from David Gabriel, the VP of Sales over at Marvel Comics. He then followed up by adding that the aforementioned female minority characters are popular and some of their best sellers but that they’re not going to be doing more of them because people don’t like them.

Have you been to a comics convention? We just got back from Emerald City Comic Con, where 90, 000+ people showed up to show their love of the medium. Here’s a link where you can check out photos of the event, and you should be able to see a good cross section of obvious minorities, David. That doesn’t even take into account the non-visible minorities; the people that look like the cis-white males you think you’re catering to but are actually somewhat else.

We look white, Christian, and male, but we’re a Jewish agender asexual and we’ve been reading your comics since we were a child. We’ve got boxes full of your comics, shelves full of trades we proudly display. Might there be some other reason, particularly when titles like Saga, Injection, the Woods, Divinity, Lazarus, Giant Days and others are doing so well while being full of the diverse characters you say people aren’t interested in…?

A while ago we posted our (rather discombobulated) thoughts about Captain America being turned into a Nazi by a writer named Nick Spencer, who has since gone on to defend Nazism on twitter and write a black man apologizing to a white supremacist for mentioning the centuries of systematic oppression that African-Americans have endured. Our response then was driven by gut-level anger and we reworked it and expanded our thoughts and think that might be a little more sensible.

Nazi Captain America sold 36,610 copies last month, though, and was the fifty-fifth top selling comic of February. Okay. Literally ten more copies than Iron Man with the new African-American female lead, a thousand less than Doctor Strange, and seventy thousand or so less than Star Wars: Darth Maul. That’s not good. If you’re going to tell a story on the ashes of six million dead Jews and eleven million dead in total, all from living memory, you might as well get some kind of sales bump, right?

We guess that’s what you’re hoping for with the upcoming Secret Empire event, and this… well, this is what we want to talk about. See, it’s not diversity that’s killing you, Marvel: it’s your stunt writing and your constant idiot-event comics. Especially your big dumb event comics. We’d like to elaborate on this point, Marvel, because it’s important and we want you to do well.

Your movies are excellent and other than a few stumbling blocks in Age of Ultron you guys are riding high. Someone in comics must have realized that and your editorial board has tried to capitalize by making the comics more like the movies. A big push to do that came and was finalized with Secret Wars, wherein you guys also fixed the editorial mistakes of the past decade. Remember when Civil War turned Iron Man into a villain and how you spent ten years trying to fix that and failed? Well done. A shame you’ve just done the same to Carol Danvers.

Since Secret Wars ended last year, you’ve had nine major crossovers: Avengers Standoff, Spider-Women, Apocalypse Wars, Civil War II, Dead No More, Death of X, Inhumans vs X-Men, Grounded, and Monsters Unleashed. You’ve got at least another four coming: Secret Empire, Til Death do Us, Weapons of Mutant Destruction, and Edge of Venomverse. That’s a lot of comics to buy and a lot of story to keep track of.

Here’s the trick, Marvel: when you do one of those crossovers it touches on every other comic involved with it, so even if you don’t want to read about how Captain America is a Nazi now, your crossover is going to make it impossible to for us to avoid those stories and they’re going to interrupt the ones we’re already invested in. You’ve given us a visceral level of disgust when it comes to Steve Rogers, Marvel, and any comic that he appears in is one we’re going to drop and not pick up again.

That same logic applies across the board to comics we might be invested in when characters we don’t care about show up and we can’t finish the story or understand the comics we like when the continuation of the story is in a comic we might not be interested in or able to afford. We like the X-Men. We don’t care about the Inhumans. When the X-Men are set up to be the villains in another shitty crossover that makes the heroes instead because shitty editorial mandates are shitty, well.

The fun part is that the X-Men are being cast as the villains as a result of the same shitty editorial mandates, ones that nearly drove you into bankruptcy twenty years ago, Marvel. You guys were putting out so many crossovers that no one could follow your comics anymore and readers left in droves for companies that weren’t so scattered. The only way you saved yourselves was by selling the film rights to your most popular characters in perpetuity to other people: Sony got Spider-Man and the Fantastic Four, Fox got all the mutants, and you were stuck with what was left.

Iron Man was a B+ player until the movie made him an A-lister. The only reason Iron Man got your first real movie was because there were no mutants, no Spider-Man, and no Fantastic Four. People who watched the movie, though, and might have been interested in trying the comics were subjected to Civil War-era Tony Stark, which turned people off in droves. Your comics have been mostly about heroes fighting heroes, which is depressing and something very few people are interested in.

For proof, let’s take a look at the top five selling comics of February 2017: Star Wars: Darth Maul #1 (105 177 copies) is about a Sith Lord fighting the forces of good, Batman #16 (102 096 copies) features good guy Batman fighting bad guy Bane, Batman #17 (99 637 copies) continues that story (and suffers from DC Comics putting out two issues of everything every month), Justice League of America #1 (93 494 copies) featuring the best heroes fighting the best villains, and Super Sons #1 (90 345 copies) has the next generation of heroes fighting the next generation of villains.

Do you see a theme here, Marvel?

We’re done with heroes fighting heroes. DC Comics learned this and so, after their latest reboot, they started focusing on stories about hope and heroes fighting evil and heroes being happy and now they have seven of the ten top selling comics for February 2017, while your only two entries on that list are both Star Wars spin-offs which are about – wait for it – heroes fighting villains (and, notably, villains that were inspired by Nazis).

Your first non-Star Wars comic on the top selling list for February 2017 is Amazing Spider-Man #24 (61 953 copies), and that comic features a massive supporting cast of minorities and deals with Peter Parker fighting the forces of evil as a hero, as a man, and as the CEO of a corporation. That’s interesting. I want to read that. I would totally read that except that Spider-Man is definitely going to be a part of at least seven crossovers this year and I’m done. His story is going to be interrupted so many times that we might not even remember what it was before the event, so what’s the point?

If a character has no impact on their story then we do not care about that character.

And that’s why your sales are flagging: stunt writing bullshit (ooooh Magneto is a Nazi now, a Holocaust survivor is a Nazi, how edgy… no, wait, fuck you) that we all know won’t stick and will be retconned while you guys talk about how, no, this is the new normal, and endless fucking crossovers that mean nothing and will be retconned out of existence because they are generally awful.

Those titles that do work for you and have constant numbers? Miles Morales, Ms. Marvel, Spider-Gwen, and Moon Girl? Those are ones David mentioned by name. Also, Mighty and Unworthy Thor? They avoid or do damage control on all your big dumb events, pull in consistent numbers, tell good and complex stories, and have readers who are invested in them. Maybe instead of doubling down on the practices that nearly killed you, Marvel, you could instead just tell good stories?