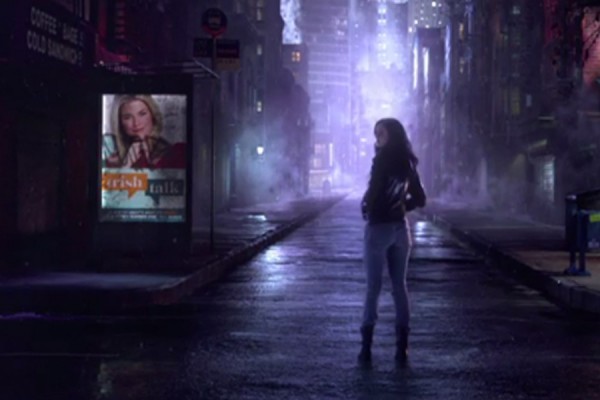 Jessica Jones, the second of the original series being produced by Marvel and Netflix, has been out for a little more than two weeks. We’re about to dig deep and talk about the guts of the thing, why it works and what makes it excellent. So, spoilers they are ahead, obvs, but we’ll try and keep them to a minimum.

There was some concern about how Jessica Jones was going to be translated from comic to screen. It’s a dark story, about a hero who get co-opted her first time out, and is physically, mentally, and spiritually destroyed by one of the scariest villains Marvel has ever produced over an eight month period. There’s a real sense of darkness throughout the tale, grounded by who and what the villain is, and his taint touches everything that happens. Would Netflix be willing to host something this disturbing.

Well, yes. They’ve done it before, even if they did caper off with a whimper at the end.

But it’s still different. This is not your standard Marvel fare; it’s not your standard anything fare. It’s radically different from pretty much everything else you’re going to see, and it hits every point it wants to make while staring you in the face and daring you to blink.

You won’t, by the way. You won’t blink. You won’t be able to tear your eyes away from the screen. This is just as good as Daredevil was, and has an even greater impact than that masterpiece did.

Right from the start, Jessica Jones establishes that the main character is female, that the characters that are going to have development in this tale are all female. The male characters are mostly static, eye candy, or obstacles to be overcome. Their agency is tied to Jessica’s story, and any catharsis they experience is only through the advent of her presence and tied to her growth.

What’s remarkable about this is that the inverse is often true: female caricatures on traditional television have served subservient roles to male characters, helping them to grow, providing obstacles, or being prizes to be won. Instead of looking to be lauded for strong female characters, Jessica Jonesopts to give us strong characters that just happen to be female.

And not all of these characters are good, or strong. Jessica Hogarth, a lawyer that contracts Jessica for various jobs, is shown to be callous, selfish, and generally horrible. Pam Walker, Jessica’s adopted mother, is a self-involved woman who abused her daughter and adopted Jessica for publicity’s sake. Jessica herself suffers from post-traumatic stress disorder the likes of which you will see nowhere else.

Which is another thing that Jessica Jones does exceptionally well: portray what it is like to live with PTSD. The paradigm under which our society lives is based on materialist-nihilist principles, meaning that our culture accepts physical reality as the sole truth. In this case, that means that society typically sees mental illness as either a moral weakness or something that simply isn’t real, despite any evidence to the contrary.

Recently, we’ve been re-examining our cultural beliefs, and mental illness has been getting a lot of attention and is now being equated to physical illness. Depression, anxiety, and other ailments are being given the same consideration as their physical counterparts, and being seen as sicknesses rather than failings. Jessica Jones gives us a variety of characters that are suffering from PTSD and doing the best they can, from the villainous Kilgrave to Trish Walker to Jessica Jones herself.

Jessica spends much of her time trying not to let her world overwhelm her, having to take moments to separate and ground herself as life goes on around her. She’s dealing with an eight month period where her agency was taken from her, where she was raped in every possible way with no end in sight, and where her escape from that situation came about because of happenstance rather than rescue.

The truth is that mental illness is real; it is a struggle to live with depression or anxiety or anything of the other illnesses that can afflict a mind. Some people are born with these illnesses, and others – like PTSD – happen because of experiences in life. Like physical scars, they never go away, but they can be lived with. Trish overcame her trauma to become a celebrity. Jessica is still coming to terms with things, but she’s getting there.

And if Jessica Jones treats mental illness with respect, it stares unblinking at the horrors of rape. Compare this to Supernatural or Agents of SHIELD or any of a dozen other narratives where someone is mind controlled and raped and the situation is played for laughs. A woman was raped in Supernatural and her life was destroyed by it and her trauma is used as a punchline. Agent Ward is raped by an Asgardian in Agents of SHIELD and the other characters mock him for it.

Jessica is destroyed by what was done to her. The character of Hope and her whole family are entirely undone by what was done to her. Jessica has to remind Hope that nothing that happened to her was her fault, while society is ready to condemn her and blame the victim. We see this happen in our own world, where people are raped and then blamed for it; what were you wearing, why didn’t you fight, you knew him so it couldn’t have been rape…

There’s a male character that lost his jacket to Kilgrave, and equates his pain to that of everyone else. He had no choice in what was done to him and can’t get over it, and no one makes fun of him for his inability to do so – a narrative choice that acknowledges that any loss of agency is horrible, regardless of the scale.

By that same token, however, rape, mental illness, and trauma are never used as an excuse for poor choices. Everyone is culpable for the things they do and the choices they make, and serious weight is given to every action in Jessica Jones in a way that very few other narratives manage, regardless of medium.

Kilgrave himself is a monster, yes, and we’re shown that he has a tragic backstory that explains what he is without excusing it. He is evil on a level that we haven’t seen in Marvel before, and is treated as the terror he is without exception. No one sympathizes with him specifically because of what he does: his actions and continued monstrousness make it okay to pity him without forgiving him.

An apology only has weight if there’s no excuse behind it and the offending party intends to be better, two qualities that Kilgrave lacks utterly. He is a charming, pretty monster, a predator that no one believes in and who leaves a trail of broken lives in his wake, and is all the more terrifying for how everyone around him accepts him.

The slow reveal of Kilgrave – and Jessica herself – help to ground this tale in the real world. Jessica Jones, at its heart, is a detective story. She has to uncover the truth of things methodically, discovering new facets of the crime she’s investigating while taking us along for the ride. Taken purely on that front, this is brilliantly done and executed, but it’s everything that happens around the story that makes the story so much more than it might otherwise be while also laying the groundwork for both a sequel and the next of the Marvel/Netflix collaborations.

And the next collaboration? Luke Cage.

If the character of Jessica Jones is a study of a cultural failing, the character of Luke Cage is one of the most important power fantasies imaginable: he is a black man whose power is to be bulletproof. Given the terror that African-Americans live in of being shot by police officers or crazy white fundamentalist terrorists and the way the media portrays these incidents, it’s not hard to imagine why so many people might dream of having that super power.

Jessica Jones gave us fully fleshed characters, firmly grounding in reality, who happened to be female. Given this, we fully expect Luke Cage to give us grounded main characters who just happen to be black. It’s hard to imagine a more timely or necessary narrative.

The acting of everyone involved is brilliant. Krysten Ritter’s turn as the title character is based around a tough fragility – someone who looks strong but might break at any moment, and everything she does, from walk to silence, reflects Jessica’s pain. Rachael Taylor and Mike Colter both bring their a-game, inhabiting their characters with a vulnerable depth that Jessica can rely upon. David Tennant’s performance perfectly captures the solipsistic horror that Kilgrave is.

A special shoutout needs to be given to Eka Darville, however, as it’s the character of Malcolm Ducasse that truly ties everyone else together. The revelation of who he is and what’s been done to him is the purest motivation anyone could give Jessica outside of her own experiences, and he handles his role with a pure sense of hope and tragedy in equal measure.

There’s some subtle and not-so-subtle ties to the rest of the Marvel Cinematic Universe, too, mentions of Thor and Captain America, kids playing at being the Avengers, and Rosario Dawson resuming the role of Claire Temple from Daredevil. All this gives the series an increased sense of depth without requiring anything more than what’s present and without taking away from this specific narrative.

In short, Jessica Jones is just about perfect, and you should watch it.